Shen Yun Shows Model the Spiritual Side of China’s Arts 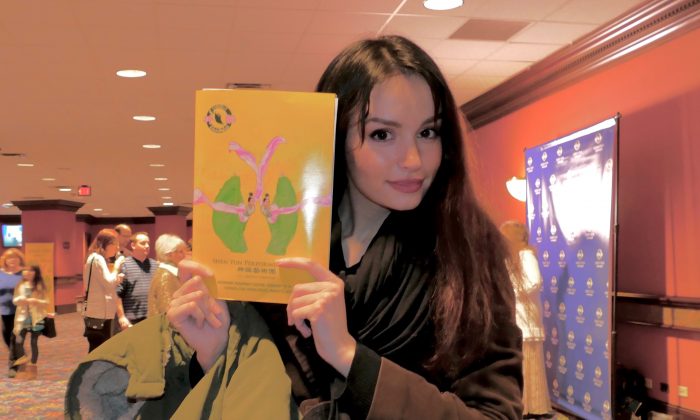 ROSEMONT, Ill.—Model and photographer Tsveta Manilova loves all the martial arts films, like “Crouching Tiger, Hidden Dragon.” She is such a fan of Chinese culture that she named her son Bruce after Bruce Lee, the famous movie star/martial artist. Yet, despite her knowledge of Chinese performance through these films, she found the dancers of Shen Yun Performing Arts to be better than she could have imagined.

“I mean, I know that the Chinese are athletic, but this is …” she said, looking for words to finish her thought. Ms. Manilova spoke to a reporter after New York-based Shen Yun’s performance on Feb. 13 at the Rosemont Theatre.

“I am a fan of Chinese culture, but this is awesome,” she said.

Shen Yun is known as the premiere classical Chinese dance company in the world, a dance system with thousands of years of development, being enhanced by each dynasty over the ages. The form is similar, and includes strikingly similar movements to martial arts, which left the legacy of its tumbling and aerial movements.

What Shen Yun has done is use classical Chinese dance to tell stories from China’s rich traditional culture.

And of all the story-based dances in the program, one taught Ms. Manilova something about China that she didn’t know: that the spiritual discipline Falun Gong, whose adherents practice peaceful meditation, is persecuted in China today.

She took the dance “Hope for the Future,” personally. In the dance, people of faith are attacked by Chinese Communist Party police.

“It was quite upsetting,” Ms. Manilova said. “I am from a communist country, too,” she said.

She knew that China was originally a deeply spiritual place, with Buddhism in their ancient past. Even martial arts has a spiritual basis, she says.

It’s not just about “warfare, it’s something spiritual. It’s something that connects them to their religion and nature—all the living creatures in our world,” she said.