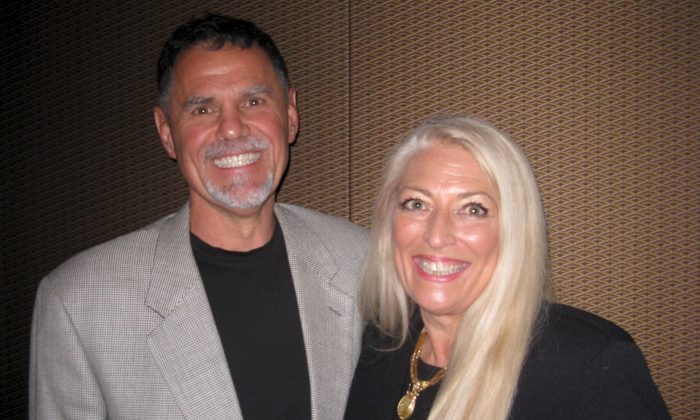 “I love the spiritual energy of it, and every bit of it is magnificent. The whole world should enjoy this,” she added. “I love also the whole cultural tradition and the calling of the human spirit to just awaken.”

Dr. Michael and her close friend, retired Marine LtCol George W. Murray, had front row seats to the sold-out performance. “We were right up close and could see every expression [of the dancers],” she said.

LtCol Murray said he was close enough to actually hear the soft landing when the dancers’ feet hit the floor. “The dancers’ athleticism is just absolutely extraordinary. We can hear their feet on the stage and see their chest rise and fall as they put everything into every move with the greatest precision, and they make it look effortless, which belies the thousands and thousands of hours of practice,” he said.

Shen Yun is a New York-based, non-profit, classical Chinese music and dance company that has become a worldwide, critically acclaimed phenomenon since its founding in 2006. Its mission is to revive the resplendent beauty of traditional Chinese culture.

Each performance includes approximately 20 vignettes that whisk audiences on a journey of China’s 5,000 years of civilization where myths and legends come to life through story-based dances, purity and joy are personified through ethnic and folk dances, and passion fuses with wisdom through vocal and instrumental soloists.

Dr. Michael said she enjoyed the “orchestration of every movement” of the performance as well as the spirituality. “You can feel the focus of the dancers, the energy,” she said. “It’s very powerful, emotionally, from their hearts.”

Chinese culture is deeply steeped in spirituality. With Taoism, Confucianism, and Buddhism as its foundation, China’s ancient legends are brimming with principles such as respect for the divine, benevolence, courage, and divine retribution.

With a quiet demeanor and serene countenance, one might not guess that Dr. Michael is somewhat of a giant in the world of health education.

Dr. Michael, who speaks internationally on applied integrative bio-physics, is senior director of energy medicine for the Global Foundation for Integrative Medicines, she is on the PBS advisory board for alternative medicine, the Global Advisory Board for Medical Safety Solutions, and is the appointed deputy minister of Health for the Republic of New Lemuria, a new nation in the Pacific islands.

LtCol Murray, who serves as an advocate for advanced technologies in support of the national disabled-veteran community, was struck by a particular classical Chinese dance piece entitled The Power of Compassion, which depicts modern day persecution in China. In this vignette, an officer who is in the midst of terrorizing a Chinese man and woman changes his violent ways after they help him recover from an injury.

“The presentation of Falun Gong and compassion that was demonstrated was something that reverberated directly with me as a retired marine officer. It is another validation that we appreciate and respect the freedom that we have,” he said.

Both LtCol Murray and Dr. Michael are well traveled. “I’ve traveled to 67 countries and gotten a taste of a number of different cultures,” said LtCol Murray. “You can’t help but be drawn to the core and essence of this dance [company],” he said. “It was a real privilege to have the opportunity to participate even in the audience.”

Both he and Dr. Michael heartily recommend Shen Yun to others.

“It’s been enthralling, and I think people of all ages would have the strongest appreciation for an opportunity to partake in thousands of years of Chinese culture,” he said. “There is tremendous value in that tradition. And I think that’s extremely worthwhile for anyone.”

“Everybody should see this,” said Dr. Michael. “You have to go, and I would recommend you get front seats.”