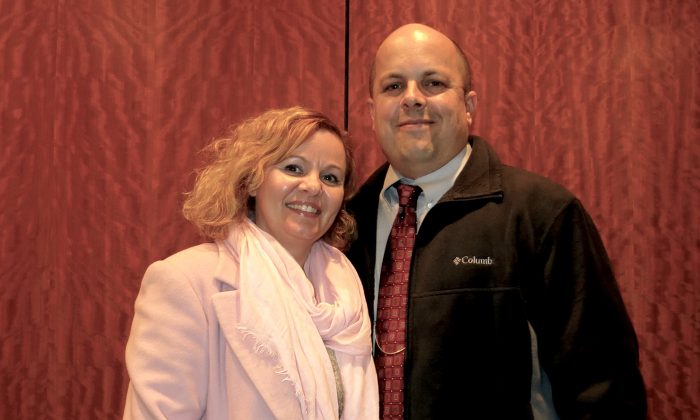 Ms. Miliadi and Jeff Baker, a detective sergeant at the Kalamazoo County Sheriff’s Office saw the opening night performance at the DeVos Performance Hall on Dec. 29 at the recommendation of Ms. Miliadi’s nephew. He is a bassoonist in the Shen Yun Symphony Orchestra, she said he told them “‘you have to go and see it!'”

He was right, she said, and they loved it. What moved Ms. Miliadi most was the history encompassed in the performance.

The struggles in China are reflected in the how the current regime has worked to destroy the 5,000 years of ancient Chinese culture. Culture that was based on Buddhist and Taoist principles, which was once nearly lost and still is not allowed in China today.

The courage of the New York-based Shen Yun performers and those people inside communist China deeply moved Mr. Baker.

“We love how people are trying to keep the culture that [the] Chinese political view is trying to suppress. We are really impressed by how [Shen Yun is] trying to keep it alive.”

Ms. Miliadi was moved as well, and impressed with the work and determination the performing arts company has put into to “keep everything alive of the Chinese culture.”

Ancient China was considered to be a divinely inspired culture, where people looked toward the divine in every aspect of their lives for inspiration. Shen Yun performers draw upon that rich traditional culture to provide the heart that drives them to excel in their art and their lives, according to its website.

“The spirituality part is very interesting. What was really impressive to me is that everything is about one spiritual being, one great power that united us all. That’s what I saw.”

Ms. Miliadi was touched by the way the spirituality was elegantly expressed.

“The dancing was absolutely amazing, the music was amazing, we were able to feel the culture more than if somebody was telling us about it,” added Ms. Miliadi.

The pageantry, the colors, the choreography and how the dance puts it all together is very impressive to watch.
— Jeff Baker

Mr. Baker called that flawless. “The pageantry, the colors, the choreography and how the dance puts it all together is very impressive to watch,” said Mr. Baker. “I’m very impressed with how it’s put together flawlessly … everything is just smooth.”