Shen Yun Performers Are 20 out of 10, Says Retired Clergyman 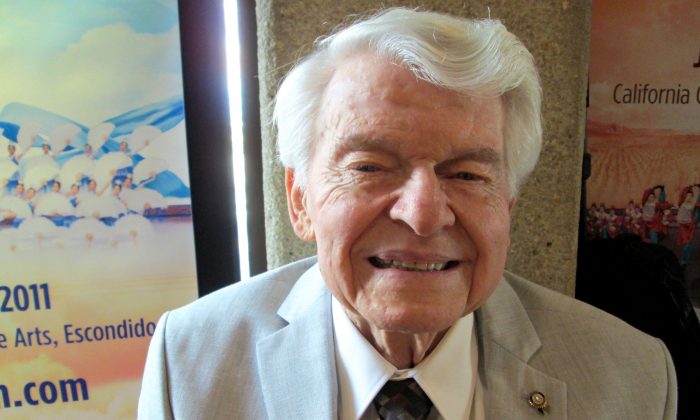 SAN DIEGO—If you’ve lived for 84 years and enriched others’ lives as a university teacher, hospital administrator, and a clergyman, you might feel that you’ve already experienced the best that life has to offer.

But it wasn’t until Romayne Chinnock saw Shen Yun Performing Arts at the San Diego Civic Theatre on March 26 that he realized he had never experienced something excellent as the performance.

“This is the best performance I’ve ever seen from anyone in these young long years,” he told a reporter just after watching the New York-based classical Chinese dance company.”It was far more than a show. It was education, it was understanding history.”

On a scale of one to ten, Mr. Chinnock gave the performers a 20. “Above excellent, really, truly I’m talking from the heart,” he said. “The dancing is really the best I’ve ever seen in my life.”

The performance incorporated Chinese history in a way that he thought the audience could get a good understanding of it in the short two hours it was presented. To Mr. Chinnock, who lived in Japan during the 1960s and encountered many different Asian cultures, the use of storytelling during the performance “helped people to understand Chinese culture.”

And that’s exactly what Shen Yun aims to do. The dance company formed in 2006 was to revive traditional Chinese culture, which had been nearly lost after China’s Cultural Revolution.

The myths and legends that unfold on stage were more than just entertainment to Mr. Chinnock. He thought the way they were presented was educational, but not like attending school. “The history part really touched my heart,” he said.

He appreciated the overall message that good will prevail over evil and said the conflicts displayed throughout the various scenes touched his heart. Some of mini-drama performances demonstrated the tragedies that have been happening in China over many years. So when goodness prevailed, “that was an excellent way to bring the hope from all of this,” Mr. Chinnock said.

As a former behavioral scientist, he considers himself a student of people. The goodness prevailing in the characters and stories served as personal inspiration, he said.

Each story was enhanced by a digital backdrop and orchestral music that blends Chinese and Western instruments. Through state-of-the art graphics technology, vivid animated scenes that transform the stage captivate audiences.

Mr. Chinnock, who knows a thing or two about the production of performances, had never seen the kind of technology that Shen Yun uses.

“The way they could come in from the backdrop and down the stairs, and then onto the stage, that was all very, very good,” he said.

Mr. Chinnock was just happy to have been able to see a performance like this in his lifetime. He thinks everybody should see Shen Yun. “I would even help financially a family member that really wanted to come and see it,” he said.