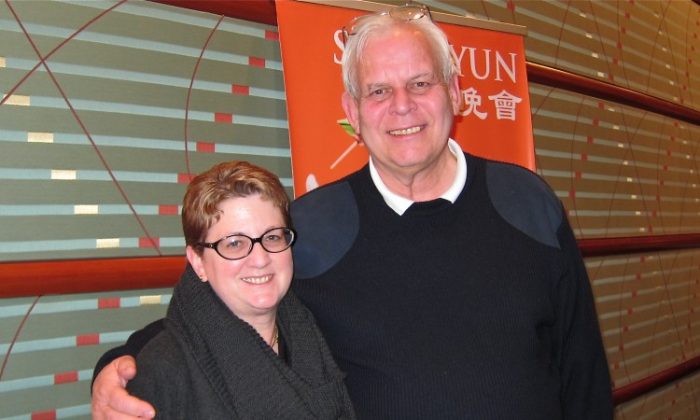 Tina and Joe Koczeniak at the opening performance of Shen Yun Performing Arts at the Aronoff Center for the Arts, on Feb. 3. (Valerie Avore/The Epoch Times)
News

CINCINNATI, Ohio—The opening performance of Shen Yun Performing Arts in Cincinnati on Feb. 3 drew an enthusiastic audience to the Aronoff Center for the Arts.

Joe Koczeniak, a retired executive, said, “I thought it was remarkable.” Mr. Koczeniak worked for a number of companies including Ford and Johnson and Johnson.

Mr. Koczeniak’s wife, Tina Koczeniak, said she was also impressed with the performance.

“I loved it. I thought it was absolutely incredible not just from a performance perspective, but also in the diversity of the performance,” said Mrs. Koczeniak, who works at Fifth Third Bank.

New York-based Shen Yun Performing Arts presents classical Chinese dance and music. The company’s “productions draw their inspiration from China’s 5,000 years of civilization … We believe this rich heritage is a precious gift worth keeping, and worth sharing with all of you,” according to the program.

Noting that she has traveled to different places with her husband, Ms. Koczeniak said that she has never experienced anything like Shen Yun.

“My only regret is that we didn’t bring some of the children and grandchildren. I think they are capable of appreciating this and understanding the message,” she said, adding that even her eight-year-old grandchild would enjoy the show.

Speaking of two dances that describe a contest between good and evil, Ms. Koczeniak said, “it’s important that we not take for granted what we have in the United States.”

“Things like this do make me take a step back and stop and think about how lucky I am to live in a country where I can think and do and believe what I wish.”

Tickets are still available for the Saturday evening performance of Shen Yun at The Aronoff Center for the Arts, Feb. 4.