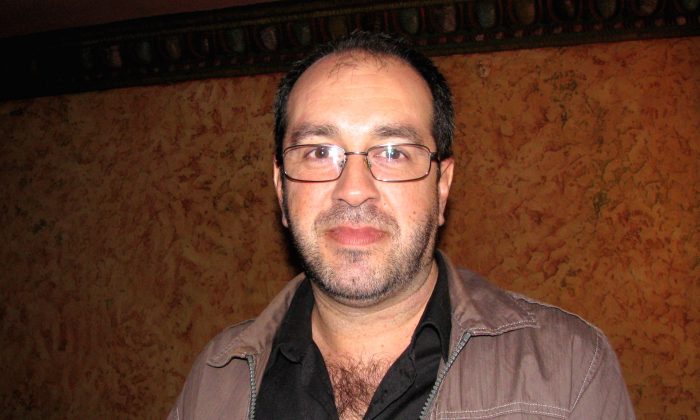 SYDNEY—Professional musician Mr. Arrua could connect with the many musical elements when he watched Shen Yun Performing Arts on Feb. 7 at the Capitol Theatre.

Mr. Arrua, a musician originally from Uruguay, describes himself as a bit of a ranger as he plays piano, percussion, guitar, bass guitar and also composes and arranges his own music.

His band, SonBuQ, is a progressive Latin folk band with alternative sounds, traditional instruments and innovating musical arrangements which is a unique mark of this band, according to his website.

Having all these skills as a professional musician he could truly understand the creativity, dedication and discipline it takes for Shen Yun to create their unique musical compositions.

“I appreciated the combination of the Western instruments with the Chinese. Well arranged. A lot of work I can tell, lots and lots of work.”

According to the company’s website, “Shen Yun’s one-of-a-kind orchestra, with its all-original compositions, blends East and West like no other … The result—two great classical music traditions producing one fresh, unexpected sound.”

He also thought the arrangement, synchronicity and balance between the two cultures was perfect.

“I could hear things that were definitely Western. And we could digest [this] without losing the flavour and the essence of the oriental influence.”

Mr. Arrua was also very impressed with the composition of the music. He thought the orchestra and the music was perfectly arranged supporting and enhancing the dance and visuals.

“I think it was composed very much with the visual in mind, which obviously was to support what you were watching, so it was perfect really,” he said.

“It was a good integration of both, supporting each other.”

Mr. Arrua was very impressed with the erhu solo. The two-stringed erhu is 4,000 years old with hauntingly beautiful sounds that have been compared both to the sound of the violin and the human voice.

There were many aspects of Shen Yun that delighted Mr. Arrua.

“The costumes were amazing. How the dancers were synchronized, was perfection really. The interaction with the backdrop was interesting,” he said. “Artistically, it was beautiful.”

He said Shen Yun was so rich he needed time to fully absorb it.

“So much music, so much culture, so much dress, dance, so many things! I need a couple of days to digest what I’ve seen. It’s thousands of years of culture in a couple of hours; it’s a lot to take in.”

A Flurry of Kaleidoscopes

Both are professors of management and are specialist researchers and educators in sustainable leadership. They co-founded the Institute for Sustainable Leadership, its mission is to assist organisations achieve quantum leaps in organisational performance.

“It was lovely! It was wonderful! It was very exciting, very colourful,” she said.

“There were different ethnic groups represented. So you got a little taste of some of the minority dancers, as well as the more traditional widespread Chinese culture.”

Mr. Bergsteiner agreed, “I enjoyed it, particularly the costumes, the music, the dancing. I thoroughly enjoyed it.”

The digital backdrop was a feature for Mr. Bergsteiner. “I particularly enjoyed the melding of the cinematography and the actual live performance, very clever,” he said.

State-of-the-art digitally animated backdrops provide striking scenery that extends the stage, allowing interaction with the dancers thus giving the audience a sense of being brought into the story.

Ms. Avery said, “I really appreciated the interaction between the technology and the dancing and the performers. People were diving in and out. It added to the excitement of the whole thing.”

“The orchestra was just wonderful. I loved the blending of the Chinese and the Western instruments. And the solo performance by [Xiaochun Qi on the erhu.]” she said.