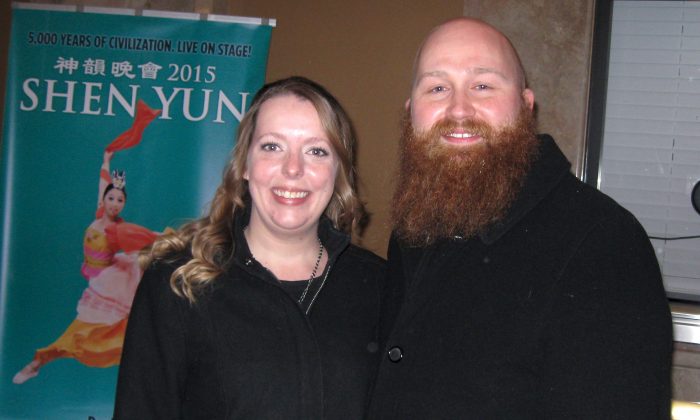 “Accentuating the beauty of ancient Chinese instruments amidst the grandeur of a Western symphony, Shen Yun Symphony Orchestra is restoring the glorious heritage of ancient Chinese melodies, blazing a brand-new path in the world of classical music,” states the Shen Yun website.

The people attending the Feb. 22 performance of Shen Yun at the Peabody Opera House found the spirit of Chinese music with the power of a Western orchestra to be a most enjoyable experience.

“The Chinese instruments were interesting to hear and unique. We don’t get a lot of opportunity to hear those types of instruments here in the West and this altogether is very enjoyable,” said Gabriel Ballatore, a subcontractor for a logistic company. He attended the performance with his wife, Kimberly.

Mrs. Ballatore agreed and said, “This is a once in a lifetime type thing to see, and I think it is just really beautiful.”

“The music is fabulous,” said Ruth Grote, an educator. She thought it a big plus to be hearing a live orchestra rather than taped music. The erhu soloist techniques captivated her.

“The music is amazing, very talented,” said Kristi Stackle, financial analyst at Washington University. She and Angela Maurer found the music to be very relaxing. “The music is so soft; it’s beautiful,” said Ms. Maurer.

Mr. Ballatore resonated with the performance itself and the underlying nature of traditional Chinese culture. “Just everything was well put together; morally enjoyable, not just the sounds and the visuals but morally,” he said.

In addition to the Shen Yun Performing Arts Orchestra, another musical features of Shen Yun are its award-winning vocalists. “Their ability to perform bel canto while retaining perfect Chinese diction is unparalleled,” states the Shen Yun website.

Projected behind the singers are the lyrics they are singing, often describing the soul’s yearning for the divine.

“Just the fact that it was spiritual, and they were bringing in spiritual aspects to the singing really was enjoyable to me. It added a little more than what most performances would where they lack spirituality in their performances,” he said.

The entire Shen Yun performance was “very enjoyable for my wife and myself. If you had a family with you, it would be great,” said Mr. Ballatore.