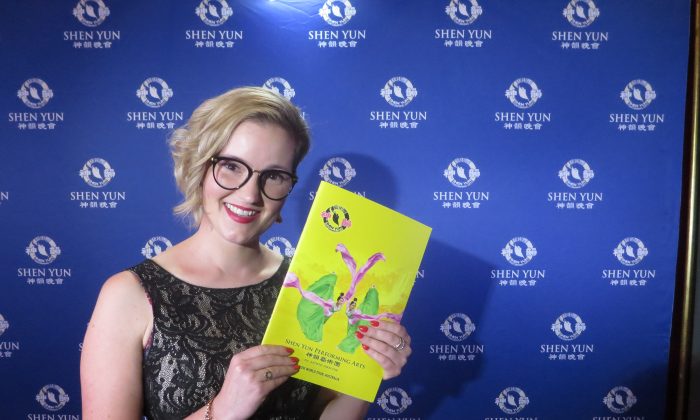 MELBOURNE, Australia—For Jayne Appleton, a finance analyst, and her sister, the opportunity to see Shen Yun Performing Arts together was a rare opportunity. Her sister works in Afghanistan and bought the tickets online from there before flying to Melbourne, Australia to see it with Ms. Appleton. The sisters attended opening night at the Arts Centre Melbourne, State Theatre on Feb. 20.

Ms. Appleton comes from a family of dancers who do calisthenics so she appreciated the different forms of ethnic and folk dancing. Shen Yun, however, was so much more than a dance performance, she said. “It wasn’t just a performance, it was something to think about and learn from.”

The website states, “Chinese folk dances originate in the local folk cultures of the majority Han ethnicity. And yet the dances from different regions can be as diverse as the dances of different ethnic groups.”

She commended particularly the male dancers for their diverse range of movements.

The male dances … we really thought were fantastic.
— Jayne Appleton

“The male dances … we really thought were fantastic. They were able to let loose, and very fast, very snappy,” she said. “They had great movement, great rhythm and they were very fast, very to point.”

The dance ‘Drums of the Grasslands’ set on the lush green grasslands where the dancers leap around the stage while playing a paddle drum, delighted Ms. Appleton.

“Being able to do that at the same time as they moved, that was something that we really enjoyed,” she said.

Ms. Appleton also appreciated the way the female dances were able to use their props, fans or sleeves, to enhance the beauty and the meaning of the dance. In one dance ‘Fairies of the Sea’ the dancers used the fans “to get the image of water and light movement. Enjoyed that!” she said.

Ms. Appleton noted the difficulty of many of the movements and praised the skill of the dancers in making them look so easy.

“The way that they’ll float, in a lot of their movements, across the stage rather than step. Watching them do that effortlessly,” she said.

“The dance that they did where they were in traditional shoes … that showed more of a skill and a balance where they had to try to make it look easy even though anyone who’s looking at what they were dancing in, their footwear, would know that it was anything but.”

As a calisthenic girl in the past, she commented on the costumes noting the vibrant colours. She also appreciated the design and work that had gone into them.

“Whoever designed them and created them and sewed them, it suited their bodies well and it allowed for them to have movement and I think it added to their dance.”

Based in New York, Shen Yun has classical Chinese dance at its heart but also incorporates a digitally animated backdrop and a blended orchestra incorporating traditional Chinese and classical Western instruments giving a complete theatrical experience.

“I love a symphony orchestra. I really enjoyed that. I liked how both came together.” Ms. Appleton said.

She was saddened to learn that the Chinese are not free to express their beliefs in their homeland.

“That they were not allowed to express that or have their cultural identity or their spiritual identity … ,” she said, “That’s not something I was even aware of, so I’ve learnt that tonight.”

Ms. Appleton was intrigued by the divine aspect in Shen Yun and, keen to find out more, she said she would search it as soon as she had internet reception on her phone.