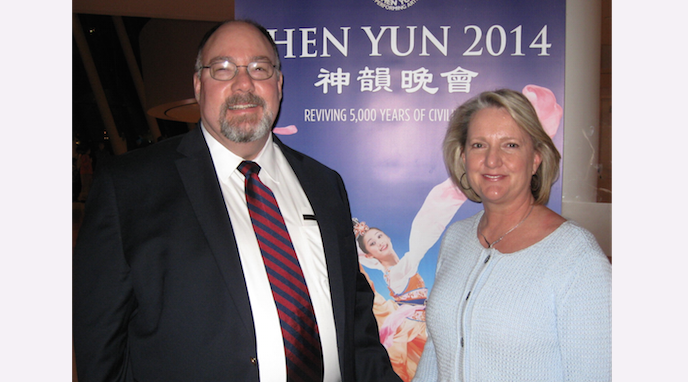 ‘Shen Yun Makes One Smile All the Way Through’

James T. Elliott, M.D., F.A.C.C. is a partner of Missouri Cardiovascular Specialists. He and his wife Evelyn, who is an occupational therapist, attended Shen Yun’s evening performance.

New York-based Shen Yun has four touring companies that tour the globe simultaneously. It has been captivating theatergoers around the world since 2006. Tonight was Shen Yun’s third of four performances in K.C. this season.

Dr. Elliott explained how impressed he was. He exclaimed, “The integration of the computer graphics and the folktale and story-line made it amazing.”

“I loved it,” Mrs. Elliott commented. “I was amazed at the stories they presented and was thinking … it’s something that the young could be entranced by it, but the old would end up loving it too, so I thought it was very well done. And the costumes were gorgeous, beautiful, very, very gorgeous.”

Mrs. Elliot said seeing Shen Yun made her feel very happy. “I was like smiling all the way through it. I was watching the faces of the performers, too, trying to see their eyes and they were smiling too,” she said.

Shen Yun’s mission is to revitalize traditional Chinese culture through the performing arts. Its program consists of mini-dramas that depict scenes from China’s history, mythology, folklore, and literature.

Dr. Elliott said there was absolutely something to learn about traditional Chinese culture. “Where I did my undergrad [degree], we actually had a very strong program in ancient history, and so I knew a few of the legends, but I learned more, I think, from watching today,” he said.

Mrs. Elliott learned a lot about Chinese culture. “I’ve never been exposed. Where I grew up we didn’t have much cultural diversity, so this is the first time I’ve ever been to performance like this,” she explained.

“There is a big difference,” commented Dr. Elliott on the duality between the male and female dancers. “I mean I think the men are more athletic and more marshal in the way they do it, and the women were more graceful, built into the choreography, but I thought it was amazing.”

The doctor believes that one of the performance’s stronger messages is that too much of China’s history and spirituality has been lost due to the ideals of the current government there.

The doctor pointed out that “by presenting it in other places in the world, they bring that back to light, to let people see it, and understand it, and to understand the plight of people who are still in China.”

“I think that they did a very good job to present something in a very positive way and in a way I think younger kids could understand [it],” she added.

“We were trying to get other people to go, and… I think we will be telling what they missed!” said Dr. Elliott.