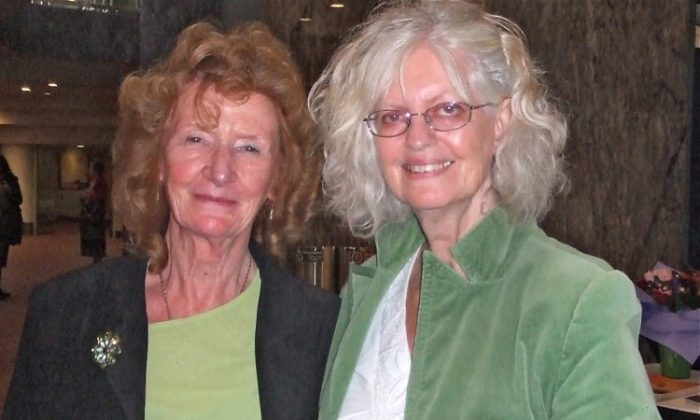 AUCKLAND, New Zealand—Shen Yun Performing Arts final show at Auckland’s ASB Theatre was a huge success with the audience showing its appreciation throughout the performance. Despite being well into the throes of Autumn, the Auckland performance played during three days of brilliant sunshine, finishing on Sunday, 22 April.

The matinee performance was attended by Noeline Goldie, a retired principal and former academy of ballet teacher, and her neighbour Ann Saunders, a bank officer.

Ms. Goldie had been with a friend to see last year’s performance and had loved it.

“If I couldn’t find anybody to come with me I was going to come on my own. That’s how special it is.to me,” said Ms. Goldie.

“It’s a fabulous culture,” she said.

The mission of Shen Yun Performing Arts Company is to revive China’s traditional 5,000 years old culture which has nearly disappeared over the last 60 years under the rule of the Communist Party.

Shen Yun is primarily a classical Chinese dance performance that draws from the wealth of stories and legends passed down throughout China, the company’s website states.

Ms. Goldie was astounded by the colour, the music, the beauty of the performers, the movement and especially the choreography.

“I really appreciate the choreography and the suppleness and just the ability of the performers—just so graceful and so strong.

The composition and formation of the dances themselves were “just so clever”, she said.

“That is something that I personally struggle with and to see it done so easily and so interwoven-just lovely.”

Classical Chinese dance has a history of thousands of years and is a dance art form based on a foundation of traditional concepts of beauty, says Shen Yun’s website.

The dances conveyed the elegance and the delicate nature of the Chinese people, said Ms. Saunders.

“The colour, the costumes-were absolutely fantastic and just the ability of the people was absolutely marvellous,” she said.

Ms. Goldie said she taught in the academy of ballet for many years and found it interesting to work out the contrasts and the similarities between the two dance schools.

But it was the dance of the Joyful Little Monks that she really enjoyed.

“They are so playful and acted the part really well, naughty, naughty trainees.”

The two ladies had spent some time discussing the creativity and origins of the costumes of the dancers. They were enchanted with the traditional clothing of the Taiwanese and Tibetan dancers, said Ms. Goldie.

Shen Yun’s website says their artists collect designs for hundreds of different ethnic and traditional forms of attire. The clothing ranges from that of emperors, generals, to the clothing of everyday people.