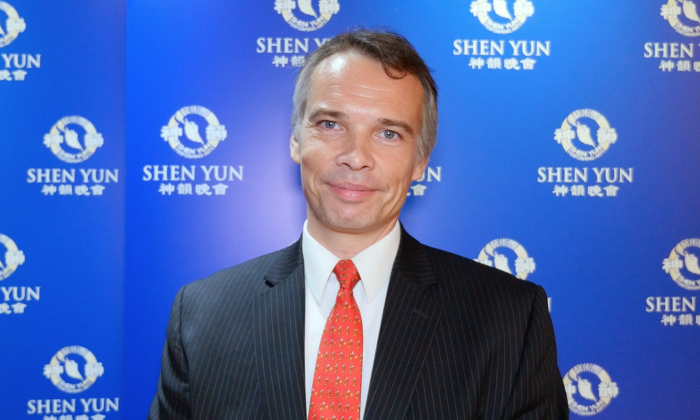 NEW YORK—Not everyone experiences art with the same eyes, but many can find themselves moved equally by what they see nonetheless.

For Eugene Petrov, former ballet dancer, now owner and artistic director of a dance school in New Jersey, Shen Yun Performing Art was moving in both its technical mastery and thematic meaning.

It was a wish come true on his birthday, on March 10 at Lincoln Center. It was a gift from his wife Karen, who knew that he wanted to see the show for many years.

“It’s not only outstanding songs and dancing but also fabulous acting, artistic presentation, and overall [the] show is technically phenomenal. Really I say from the standpoint of an artistic director to see … Phenomenal!” said Mr. Petrov after the performance, adding: “I highly recommend it. As a matter of fact, tomorrow I’ll tell my kids to see it. It’s fabulous.”

Originally from Russia, Mr. Petrov was particularly touched by the message of freedom of belief.

“I can relate to hardships of not allowing your true beliefs to come true, and live your life the way you want to. That has affected me, and that’s very strong. … Everybody should see it to understand it,” said Mr. Petrov explaining that he hoped that everybody will be affected by this message and relate the same way.

New York-based Shen Yun Performing Arts, the only company that is seeking to revive China’s 5,000 years-old civilization, is ironically one that cannot be seen by Chinese people within mainland China.

As Shen Yun has become an international phenomenon, reactions have been well-documented by Epoch Times. Audiences around the world have been enthralled by dance narratives of ancient stories, ethnic dances, and heartfelt songs. They are also finding out about the battle for the freedom of spiritual belief that is taking place in China right now.

In the dance “The Steadfast Heart” policemen pounce on people who are practicing a peaceful meditation practice—they are Falun Gong practitioners. A couple are separated, the husband is tortured and eventually survives the ordeal but he is physically and mentally a broken man. His wife is left to pick up the pieces. But then, in the midst of their despair, a heavenly scene unfolds.

This story takes place in a typical town in contemporary China, where it has been a typical scene for over 15 years all over the country, since the communist regime has banned the belief in truthfulness, compassion, and tolerance, the tenets of Falun Gong.

Apart from the classical Chinese dance, the performance also features ethnic and folk dances with which Petrov said he had strong ties.

“To see fabulous costumes, formations, and representation of ethnic and character dancing … truly not many people understand that dynamic of dance is still closed. If it’s not closed like in Eastern Europe, it’s not as popular I would hope it to be because it’s tremendously a lot of fun,” he said.

Mr. Petrov pointed out that dance is something that all cultures do, irrespective of what part of the world one lives in, yet to see such skills as displayed by the Shen Yun dancers is a different experience.

“It’s effortless and that’s what I would love to see in my dancers, and dancers anywhere.”

“I’m just as much of a fan being in the audience as being on stage. So excellent, excellent training. Fabulous,” said Mr. Petrov.

Both Mr. Petrov and his wife enjoyed the performance, and he concluded saying: “It’s a great show. I highly recommend it.”