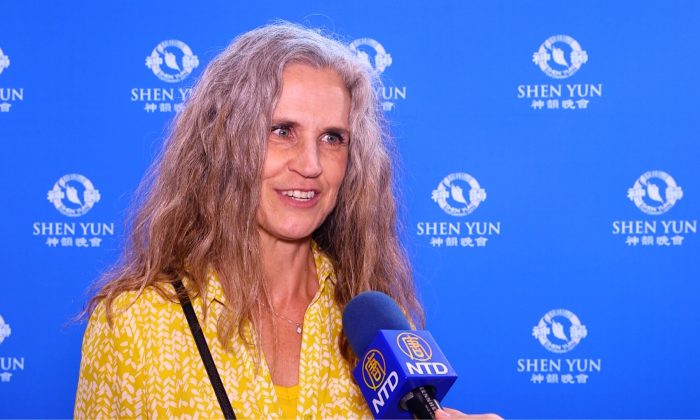 New York-based Shen Yun aims to bring back the original, divinely-inspired culture of China and its rich 5,000-year history through music and dance, inspiring audiences around the world with a brand-new program every year.

Cain said the dancers were incredible, but as a singer, she was especially impressed with the vocal soloists of Shen Yun.

“I thought the singers were absolutely wonderful,” she said. “What I loved especially was the message behind their music and the purity of their voices. It was very special.”

Cain said the lyrics of the soloists, which were projected on to the backdrop of the stage in English, were a testament to the spiritual nature of ancient Chinese culture.

“That’s still in their hearts, and that was portrayed through tonight’s performance,” she said. “It made me feel like I was this great creature that can fly, that can move about that that’s not encumbered by this mortal body that decays and grows old and has disease. That is the feeling I had, was just freedom from that entrapment.”

In summary, Cain said her experience was “life-changing and hopeful.”

‘I just cannot say enough good things about it’

Scott Pritchard, a real-estate investor and owner of Pritchard Enterprises LLC, also attended Shen Yun in Las Vegas on Thursday. Although it hadn’t been his idea to come, he raved to his girlfriend about how enjoyable the performance had been.

While the performance ran more than two hours, he said the time flew by. He especially loved the singing and the acting of the dancers in each dance vignette.

“I could not believe the story telling with no words, it was unbelievably good,” he said. “And the humor, loved the humor.”

Pritchard said the vocal soloists “were tremendous,” and the dancers were impressive. His 15-year-old daughter is a professional dancer, and he looked forward to bringing her to see Shen Yun in the future.

“The dancers are so, so light on their feet, it’s amazing to me the foot work, the timing and the balance,” he said.

Pritchard also appreciated the fact that Shen Yun has its own full, live orchestra with both Chinese and Western instruments.

“The symphony was so well orchestrated,” he said. “It flowed extremely well. I loved the show. I just cannot say enough good things about it.”

The real-estate investor learned during the performance that Shen Yun can be translated as “the beauty of divine beings dancing,” and he said he witnessed that within the performance.

“Divine, absolutely, and the creativity within,” he said. “They showcase it though their movements, through the dancing … the combination of the two, tremendous.”

“They connected with me one on one,” he continued. “I know they also connected with my girlfriend just based on their inner beings expressing themselves through the music and particularly the dance.”

Pritchard said he would recommend Shen Yun to all of his friends and family.

“Very, very impressed with from start to finish,” he said. “It was an unbelievable show. I highly recommend it.”