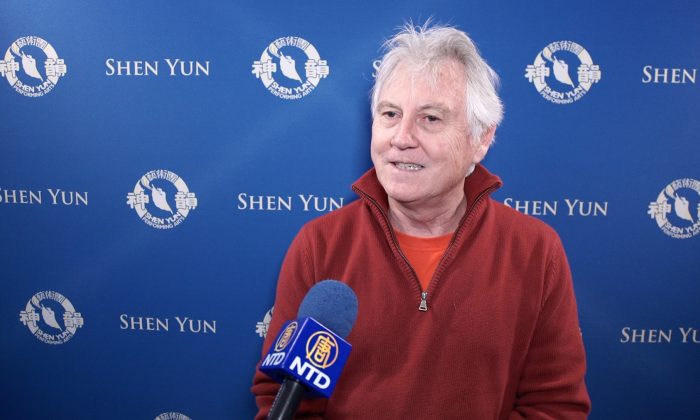 BOISE, Idaho—Shen Yun Performing Arts is not just a dance and music performance. To some audience members, the production is a “cultural experience that will impact people for a lifetime.”

Just like Chris Kent, a teacher and owner of his own martial school, who was stunned by the what he saw when he went to the Boise Morrison Center for the Performing Arts on March 27 to see the company perform.

“That experience becomes part of me now. And I will take that when I leave and it will allow me to view things even in a different light even with regards to Chinese culture,” Kent said.

Kent, who teaches jeet kune do, or “the way of the intercepting fist,” said he studied a lot about Chinese culture in the past but he never realized that gymnastics and kung fu moves actually originated from classical Chinese dance, one of his takeaways from the performances.

According to the New York-based company’s website, the movements of classical Chinese dance can bring out the inner meaning of intrinsic thoughts and feelings, reflecting the peculiarities of human nature, the standard for human conduct, moral concepts, mental state, and one’s value system. China’s deep cultural traditions are contained in classical Chinese dance, allowing its movements to be richly expressive.

Kent said it was important that young people learn about Chinese culture and its dance.

“I think it’s vital,” he said. “[The culture] should not be allowed to die or to fade away.”

Shen Yun’s mission to revive China’s semi-divine culture that was lost after seven decades of communist rule. Many audience members are surprised when they hear from the emcees that the traditional dance and music company cannot perform in China today.

Over the past several decades, China has experienced many movements aimed at eradicating 5,000 years of civilization and traditional culture. From cultural sites and temples to ancient relics and people’s beliefs, much of China’s history and spirit were destroyed after the Chinese Communist Party (CCP) seized power.

“I just think it’s phenomenal, to have this organization that’s doing this,” Kent said.

Kent said he felt many aspects of the performance left a lasting impression on him, such as learning about China’s connection to the divine. He said he was inspired to reflect on “where we come from or what we are in reality.”

“I believe that we are spiritual beings inside a human body and I felt that [Shen Yun] really brought it out a lot,” he said.

The martial artist said he would like to show appreciation for the company for sharing the culture with the world.

“Thank you for sharing this and thank you to Shen Yun for bringing this out to the people,” Kent said.