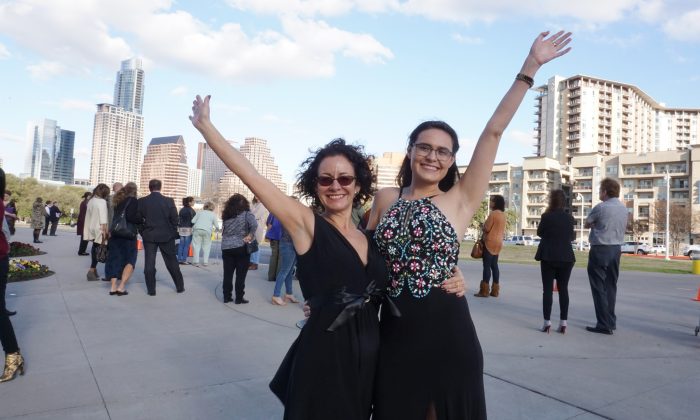 AUSTIN, Texas—Tears started rolling down Connie Roberts’s face as divine beings floated across heavenly realms. Her experience with Shen Yun Performing Arts gave her warmth like a fireplace on a frigid evening. She didn’t expect stories about the Creator nor stories about being lost in contemporary society. And the performance delivered to her more than she could have imagined.

“Just the fact that people are going to find God through your performance,” Roberts said. “I think it’s a message that people don’t realize they’re going to hear, so when they get the message, there is a spiritual connection. I loved it. It made me cry. A good cry.”

Roberts experienced Shen Yun Performing Arts with her son’s girlfriend, Isis Walters, at The Long Center for the Performing Arts in Austin on Jan. 6. The company has a mission to revive China’s 5,000 years of semi-divine culture that was lost after six decades of communist rule.

China was once known as “Shen Zhou” or Divine Land, which is a name used to describe a time when deities and mortals coexisted and a belief that the divine transmitted a rich culture to the people of the earth, according to the company.

For thousands of years, people were influenced by Buddhism, Taoism, and other disciplines. They lived by principles such as benevolence and justice, propriety and wisdom, respect for the heavens, and divine retribution and strove to lead moral and virtuous lives.

With a mission to revive these virtues in traditional Chinese culture, Shen Yun showcases many story pieces that reflect these values, and touches on spiritual themes.

Dances like “A Final Moment,” which tells a story about modern people and a battle between good and evil, inspire audience members and make them think about our role in the world today. This was something Roberts, who works as a general contractor, reflected on after the performance.

“Regardless of what the world is going to do to, with, or for you, the message is to help each other so that we can return to God,” Roberts said. She said she was able to see this message from the storyline of the overall performance.

“As souls, as God-loving souls, regardless of the culture, regardless of where you are on the planet, we are all connected. I think the storyline was basically, we came to the planet, to the earth if you will, and we need to learn from each other, teach each other, help each other, pray for each other,” she said, adding that after following the “right way to be” people can then “return to Heaven.”

“It’s like an amazing story. It’s absolutely beautiful,” she said.

The New York-based company is currently touring the world with six equal-sized groups that are set to perform in over 100 cities. Roberts said despite it being their last performance in Austin this year, the dancers still showcased a “top-of-the-line [and] A-game” performance.

She said the performers exhibited a “whole feeling of … positive energy,” which she thinks derived from the passion of the dancers and the accompanying orchestra. She said the energy of other audience members also helped lift the mood of the theater.

“When you’re walking in, you can feel the people are excited for the doors to open,” she said.

Walters also enjoyed being in the positive field. She said, “I absolutely adored it, every second, every movement, the presence of being there.”