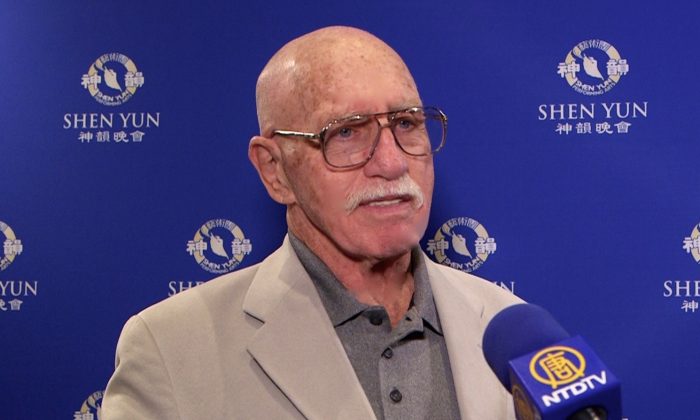 Artist Ken Sherman recounts his most beautiful and happy experience when seeing Shen Yun Performing Arts on the evening of March 23, 2016 at the Fred Kavli Theater. (Courtesy of NTD Television)

THOUSAND OAKS, Calif.—It is undeniable the love that Ken Sherman has for art. On the evening of March 23, he found the arts that gave him “the most beautiful experience I’ve had in a long time,” he said, after watching Shen Yun Performing Arts at the Fred Kavli Theater.

“I feel very uplifted. It’s a very happy experience,” Mr. Sherman said. “I’ll be carrying this with me for some time.”

Mr. Sherman is a ceramic artist. He is also an accomplished painter who combines acrylic and watercolor in producing beautiful and luminous paintings, which include a variety of subjects from Southwest Indians to flower gardens.

Amazed at the classical Chinese dance and mesmerized by the beauty and gracefulness of the Shen Yun dancers, Mr. Sherman complimented Shen Yun performers on their ability to make audience members feel a part of the performance.

“It was fantastic,” he said. “This program was unreal. It was like [I was] floating with them while they [were dancing]. It was great. I enjoyed it tremendously.”

Shen Yun is a New York-based, classical Chinese music and dance company with a mission to revive China’s rich cultural heritage through music and story-telling dance.

“Classical Chinese dance is grounded in 5,000 years of divinely inspired culture, and is a dance art form built upon a deep foundation of traditional aesthetics. Classical Chinese dance is rich with expressive power. Through expression of bearing and form, beautiful dance movements bring out the inner meaning of intrinsic thoughts and feelings, reflecting the peculiarities of human nature, the standard for human conduct, moral concepts, mental state, one’s value system, and so on,” according to Shen Yun’s website.

Each dance is backed by an interactive digital backdrop and accompanied by an orchestra that consists of a unique blend of Eastern and Western instruments.

In addition to the dance pieces, there are bel canto vocal performances sung in Chinese, interspersed throughout the performance. Lyrics of the songs are projected behind the singers and audience members are often moved by their spiritual messages.

Mr. Sherman said he enjoyed reading the English translations of the lyrics very much.

Another aspect of Shen Yun that Mr. Sherman appreciated was the variety of richly colored costumes.

Shen Yun makes 400 original and handcrafted costume pieces with brilliant colors used almost in a prop-like effect by dancers who perform classical Chinese dance, one of the most comprehensive dance systems in the world.

“All the people that I cross paths with will know what I feel about it,” Mr. Sherman said, “I would absolutely recommend it to everyone, and will be back next year to see the new show.”