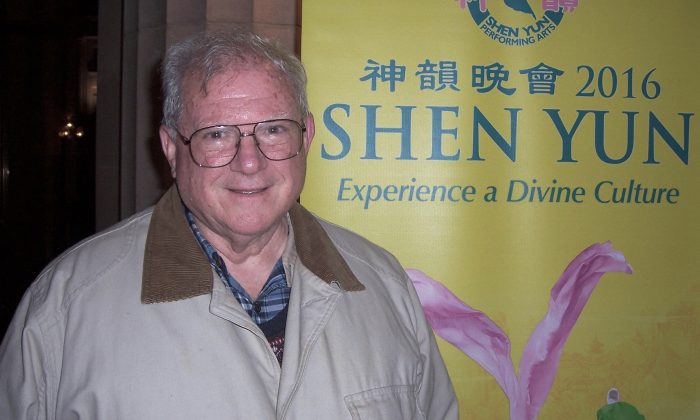 “It was fantastic! The colors, the motion, the imagery, the joy, the spirituality of the presentation was very inspiring,” he said.

‘The imagery there was really fantastic’

“The individuals in the dance team are fantastic, individually,” he said. “But it was great to see how well they were coordinated. And the images that they were able to create with their costumes, and the various things they were wearing—it was spectacular. I mean, there’s just no comparison.”

Shen Yun’s costume artists’ goal is to give the authentic presentation of attire that comes from China’s divinely inspired traditional culture, and a consummate stage effect. This didn’t escape the professor’s keen eye. He said he really appreciated the coordination of color between the costumes and the background.

“There was a lot of thought given to the costume design, so that it would correspond. You know, there’s the old mystical saying, ‘As above, so below!’ And that was very apparent in the color and choreography, that I think was very mystical.”

Spirituality and Freedom of Expression in Shen Yun

Mr. Davis shared his perception of the spirituality of many of the Shen Yun vignettes, and the uniqueness of its expression by Shen Yun dancers.

“The concept of a soul is very much apparent there, and the dynamic movement from below to above, and from above to below, and the sense of joy, of freedom of movement and expression is really apparent,” he said.

It’s a guide or purpose in life to develop one’s soul.
— Ron Davis

About Shen Yun, he said, “It’s really part of the essence of life. It is the development of the soul through life experiences. It’s a guide or purpose in life to develop one’s soul. I feel that this is so much more apparent in this kind of dancing and expression than what you usually see.”

“Also, the conflict between the forces of the evil who are trying to suppress the development of the soul—it’s very important to resist against that, and to move forward with freedom,” he said. “The evil needs to be resisted, because the spirit must be allowed to grow and express itself.”

Both China and the West have a long history of artists integrating spirituality into their work. Today, Shen Yun’s artists follow this tradition, drawing inspiration from the spiritual discipline Falun Dafa.

In 1999, the Chinese Communist Party initiated a persecution campaign against Falun Dafa, a meditation discipline based on the principles of truthfulness, compassion, and tolerance.

“I think those are excellent principles, of course,” said Mr. Davis, “and the principle of tolerance is one that our country, here in the United States, was founded on.”

Being an educator, he stressed the importance of educating people, which could help and uplift those who are suffering, as well as helping us grow, ourselves.

“Compassion, of course, is a great principle that has been in Buddhism and Christianity … ,” he said.

Talking about the lyrics of Shen Yun songs, professor Davis said that he appreciated the words and the idea behind them, about coming from the divine and returning to the divine, about the aspirations of freedom.

“It’s a natural desire of all men to develop themselves in a free way, and to come into contact with higher levels of existence. And this is a natural right and responsibility of everyone, and the repression of it is wrong. So I think there’s great hope that eventually the tyranny against religion will end.”

“I was tremendously impressed by the entire performance,” he said.