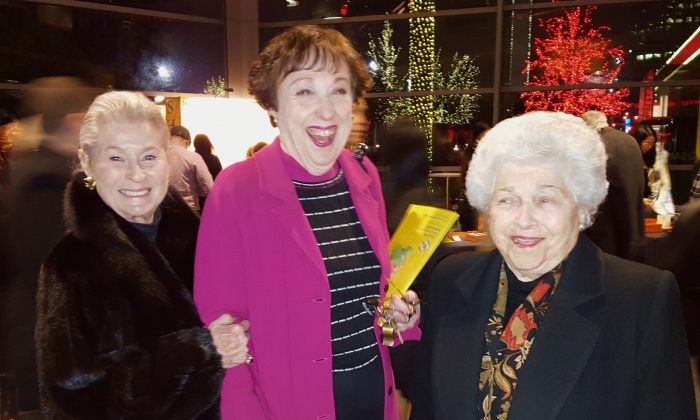 DALLAS—Joan Goltz laughed, clapped, and punctuated each exciting moment of the performance with an exclamation. As she and friends Arlene Liebs and Norma S. left the Shen Yun Performing Arts evening performance, they struggled to find enough superlatives to describe what they had just experienced.

“I thought it was the most fabulous thing I have ever seen,” Ms. Goltz said with finality.

Spectacular—that’s the word you have to use.
— Arlene Liebs, who has seen Shen Yun three times

“I knew you’d love it! That’s why I said you’ve got to go see it!” said Ms. Liebs, an avid theatergoer. It was Ms. Liebs’s third year seeing New York-based Shen Yun, and she plans to go again and again. She was proud to have brought her two friends to the Winspear Opera House on Jan. 6, and that they were able to share the perfection.

“Well there’s nothing quite like it. It’s just so beautifully done, everything is perfection,” Ms. Liebs said.

“You know what it is? Completely engrossing,” said Norma, who didn’t give her full name, saying that it was just too long to spell.

“Spectacular—that’s the word you have to use,” Ms. Liebs said.

“The absolute attention to detail, the imagination, the costumes, the colors, the orchestra, everything. Every single thing was just so fabulous,” Ms. Goltz said. “It was perfection! And you don’t see that often.”

If Shen Yun’s performance is considered perfect, the company achieves that perfection every year because it puts on an all-new performance every year. The New York-based company is now in its 10th year of touring the world, reviving traditional Chinese culture through music and dance.

Sitting front and center at the Winspear Opera House were Del and Linda Whitaker, who enjoyed the music, dance, and the ancient history imbued in the art forms. They could see the expressions on the dancers’ faces and the traditional Chinese instruments in the middle of the orchestra.

“I’m a history buff,” Mr. Whitaker explained with a laugh why the performance appealed to him so much.

Mr. Whitaker, former senior vice president of Worldwide Analog and Standard Logic who headed their U.S. semiconductor business, is a big fan of learning. A graduate of Texas A&M University, in 2012 he teamed up with Texas Instruments to create a fellowship program through the school.

In reacting to Shen Yun, he marveled at the long history of China—5,000 years, its population—over a billion, and Shen Yun’s wonderful mission to revive China’s traditional culture. It was a performance where he could just sit back, laugh, and enjoy himself.

Mrs. Whitaker said she thought it was just wonderful that though Shen Yun is not in China, the artists had met in New York to form the performing arts company. By intermission, she had read the entire program. As it explains, China was once known as the Celestial Empire, and its people revered the divine. But under the current communist regime, traditional beliefs, culture, and art have all but been destroyed.

“That certainly came to my mind, how wonderful it is they could come together, and work on a project together,” she said. The program had also detailed the unique instruments in the orchestra, the Chinese pipa and erhu, as she pointed out to her husband.