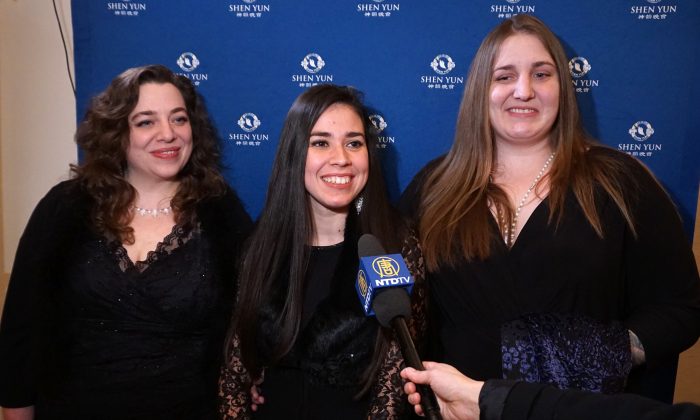 WASHINGTON—Artist and art gallery owner Terresa Leopold is a fan of traditional Chinese music and dance. So, the decision to see Shen Yun Performing Arts with her daughter Kassandra Keller-Meier and exchange student Maria Sierra was a special treat. It was an experience that brought tears, laughs, awe, and wonder.

“It was like a dream. I was so excited,” said Ms. Sierra at the Kennedy Center Opera House on Feb. 19. “It was a surprise for my birthday. So, when I went in and saw all the colors and all the music, the live music, the performance…there were moments where I felt so happy and moments where I felt like I really wanted to cry because it was so amazing. I loved it. I really enjoyed it. The story line was really beautiful too.”

Ms. Sierra felt like she was immersed in the culture, and that it drove home the idea that cultures have more things in common than one may think.

“What’s interesting about dance and music is that it’s so universal,” said Ms. Leopold. She had studied ballet for over a decade and listens to traditional Chinese music recordings. So, she was interested in the detail of the arts she saw on stage.

“I love the fluidity of it and the expression. Not just in the face, but in the body, the hands, the feet, and the quick movements. The dancers seem to be floating. It was just beautiful,” she said of the classical Chinese dance. She was impressed with the lightness, synchronicity, musicality, and “conveyance of emotion.”

The dance form, nearly as old as China’s 5,000 years, had been developed and refined throughout the dynasties into what it is today. Alongside ballet, it is one of the most comprehensive dance systems in the world, and known for its expressiveness.

“Just hearing the instruments live—a recording can’t capture the essence of a live instrument, and the emotion that goes into it. It was beautiful,” Ms. Leopold said with emotion in her voice.

Ms. Keller-Meier added that the performance was altogether educational as well. Just as China’s ancient history is a mystery to many in the West, the fact that this traditional culture and its beliefs are suppressed still in China today is not widely known either. She saw in Shen Yun a beautiful story line of this culture, portrayed with artistic elegance.

In “Poets of the Orchid Pavillion,” the male dancers snapped their fans open so in sync, it was as if it was one big fan, she said. It was only the second dance, and already one of the most striking moments of the performance for her. The classical Chinese dance told of a group of scholars who had, during a drinking game, composed one of China’s great anthology of poems.

“I thought it was beautiful,” Ms. Keller-Meier said of the performance.