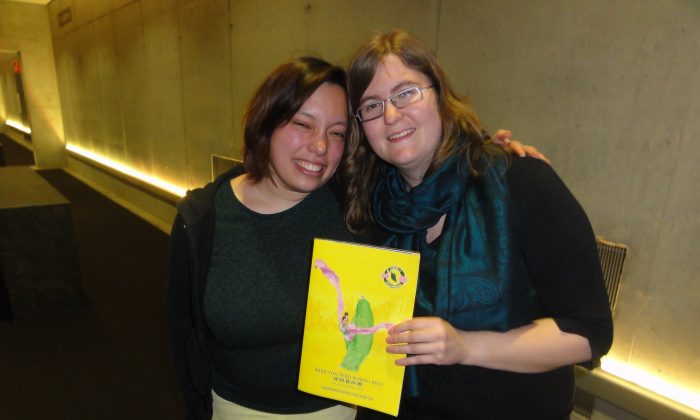 BRUGES—When violist Anneleen Brabants first heard of the orchestra whose members all meditate together, she didn’t know what to think. Then she saw Shen Yun Performing Arts in action, and she understood.

“You see the elegance, and security from their personality, really through that,” said Ms. Brabants, who plays folk, jazz, and classical music, and performs with the musical ensemble Aidreann. “Because through the meditation you get to know yourself. I discovered that as well recently.”

It opens the heart.
— Anneleen Brabants

Ms. Brabants attended Shen Yun at Concertgebouw on March 23 with her friend Klara Schouwaerts, a musical therapist. It was a first encounter for Ms. Schouwaerts, but the second time for Ms. Brabants, both of whom are friends with Shen Yun oboeist Leen de Blauw, who was on tour in Asia at the time.

An Origin That Inspires

Ms. de Blauw, like many other Shen Yun artists, practices Falun Gong. It is a spiritual meditation practice that follows truthfulness, compassion, and tolerance, originating from China.

The artists of Shen Yun, according to the program, all strive for self betterment and aim to create art that uplifts and inspires—such was the belief of artists in ancient China, as well as classically trained artists of the West.

The performing arts company was founded a decade ago, in upstate New York, by artists from around the world who wanted to revive the traditional Chinese culture. Many of these artists were from China originally, where the traditional culture is suppressed by the officially atheist communist regime. The foundation of a Shen Yun performance is classical Chinese dance, accompanied by a unique orchestra with Chinese instruments as permanent members.

Ms. de Blauw had joined the orchestra less than a year ago—Shen Yun has four touring companies of equal size—and her story inspired her friends. Ms. Brabants said she got interested in meditation, and noticed a big difference in herself after she started: “It is really nice to know it really works.”

Ms. Schouwaerts said that as someone with an education in music, she probably listens differently than an audience member would otherwise. “You notice through the interaction how the orchestra and dance respond to each other, that they interact with each other a long time, practicing, rehearsing. You notice they are attuned to each other.”

As a musical therapist, Ms. Schouwaerts is very attuned to how music affects people, and its impact in functioning as a bridge, like language.

“My first thought was, how can you make them sound right together?” she said. “But they succeed in a beautiful way, and also the interaction between them is really good.” In a Tibetan folk dance set in the Himalayas, the two-stringed Chinese erhu starts a melody that the violins build upon.

“Actually, I am shocked it was so. It sounds so easy but it isn’t,” Ms. Schouwaerts said. There was harmony not just between the vastly different types of instruments, but with the dancers on stage and the digital backdrop behind as well.

“In one way or another, everybody gets touched,” she said.

The impact of Shen Yun sneaks up on you, Ms. Brabants explained.

At the beginning, you enter a performance as a casual audience member, a casual listener. Then the inspiration “increases constantly.”

“It opens the heart,” she said.

“As a human you don’t have an idea about what to think about it when you see it, but when you totally open up your feeling, everything will enter,” Ms. Brabants said. “And that information comes from the music, dance, and everything that happens at one time like a wave over you.”

It builds up through the entire performance, and the feeling you get at the end is the most inspiring, Ms. Brabants said. Not just artistically, but in life.

“I would call it unbelievably impressive,” she said. “You can keep the feeling and impression for years, at least, in order to live more positively yourself.”