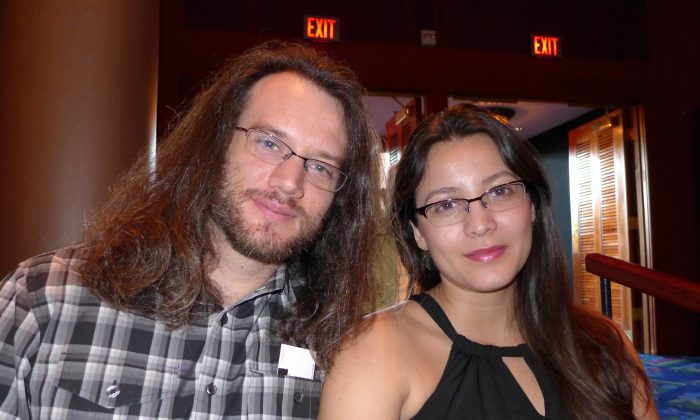 Michael Shields and Laura Cardona at the Au-Rene Theatre, Broward Center for the Performing Arts on Dec. 27, 2014. (Linda Li/Epoch Times)

FORT LAUDERDALE, Fla.—Musician Michael Shields praised the variety in Shen Yun Performing Arts, and felt fortunate to have the chance to see Shen Yun at the Au-Rene Theatre, Broward Center for the Performing Arts on Dec. 27.

According to the Shen Yun website, “Chinese dance is at the heart of what Shen Yun does. Known for its incredible flips and spins, and its gentle elegance, it is one of the most rigorous and expressive art forms in the world.”

Mr. Shields said he also enjoyed the use of animated digital backdrops that portray scenes from heavenly realms and China’s landscapes.

“I’ve never really seen that to that level. That is very interesting,” he said.

Mr. Shields grew up surrounded by classical music, as his mother is an opera singer. He was, therefore, very interested to see the Shen Yun vocalists, particularly the soprano. Shen Yun vocalists use the bel canto style to sing Chinese lyrics.

“My mom is a soprano singer, so it’s interesting to hear something I’m used to with … different aspects to it.”

Overall, Mr. Shields said he enjoyed all aspects of the performance, including the music, the dances, and China’s history and culture presented on stage.

“I haven’t seen a specific performance of dances like this,” Mr. Shield said, noting that he goes to many different performances.