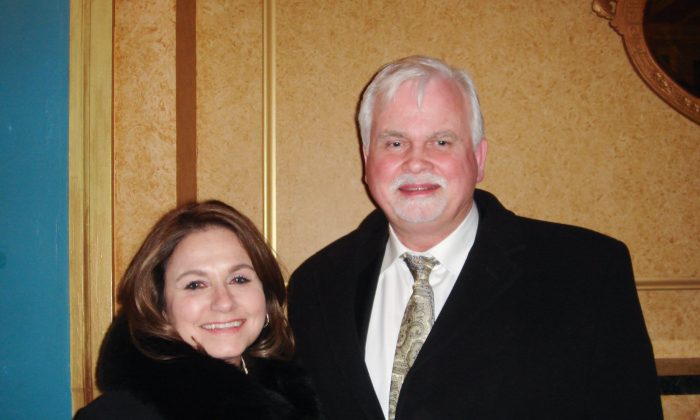 DETROIT—Before Mr. Robert Beatty saw Shen Yun at the Detroit Opera House on March 8, he had never seen performers who were as athletic or acrobatic as the dancers of Shen Yun Performing Arts.

Robert Beatty, owner and toolmaker at Avalon Tools, a company that specializes in automotive tool manufacturing, saw Shen Yun Performing Arts Global Company’s evening performance with his wife Cheryl Beatty, who is the bookkeeper, and manages the business side of their tool company. She also happens to be a seamstress.

“China was once known as Shen Zhou−The Divine Land. This profound name describes a land where deities and mortals coexisted, and a belief that the divine transmitted a rich culture to the people of the earth,” the company’s website states.

Because of this, many of the stories depicted in the dances have an underlying spiritual theme.

Being a person of faith who believes in a Creator of all life, Mrs. Beatty said, “I loved the theme of faith. It was beautiful… and that music and dance most definitely brings joy to our life.”

Several of the dances depict disasters that befall humanity due to immorality. It made her feel happy to see higher beings helping the good people during these times.

“[It] brings peace to me knowing that God is in control,” she said.

Mr. Beatty agreed, and commented on how relaxed and exhilarating he felt watching the performance.

“The theme about the Creator and everything is something that we both live our lives around and exemplify, and try to live day to day. And watching that was just really uplifting,” he said.

The husband and wife both felt that the HD backdrops really helped to bring the performance to life.

“It was like alive in the background… it was amazing to watch,” Mr. Beatty said.

“There was life beyond what we see here,” Mrs. Beatty added. “That’s how I felt. It was quite beautiful.”

Speaking of the talent of the dancers, Mr. Beatty said, “I’ve never seen performers that were quite so athletic and acrobatic as the folks we saw tonight. Just amazing. They just do things that are beyond belief. Between the melding of the dance and the acrobatics it’s phenomenal to see. It is really interesting.”

Classical Chinese dance is known for its difficult aerial and tumbling techniques, from which sports like gymnastics and acrobatics originated, as well as its expressive quality that lends the dance to story telling.

For Mrs. Beatty, one of her favorite parts was the male bel canto vocalist. She felt his lyrics really inspired her faith.

“It brings you to our Creator and there’s nothing else but that,” she said.

Mr. Beatty added, “Actually, I hoped that he would have sung again.”

“That would have been very nice to see that… beautiful to listen to—very strong performance, and the pianist was wonderful too—really nice,” he said.

How would Mr. Beatty describe the performance to his friends and family? “Beautiful evening, wonderful time, wonderful performers, the show was just really phenomenal,” he said.

With reporting by Julia Song and Andrew Darin.