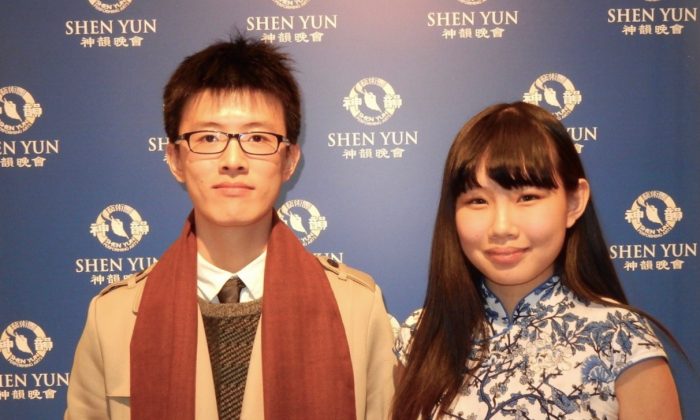 NEW YORK—In China today, most are raised atheist and taught that that is their culture. But before a few decades ago, for 5,000 years, it was quite the opposite.

“There is a reason why China was called the Divine Land,” said John Su, a student at Stony Brook University, after seeing Shen Yun Performing Arts. He and his friend Amy Liu, who came from China about four months ago and is studying art and theater, saw a performance at Lincoln Center on March 5.

For the two of them, it was a cultural awakening and a reconnecting to their roots.

In Chinese, Mr. Su shared with a reporter that he had always been curious of his heritage, but never had the opportunity to experience genuine traditional Chinese culture.

New York-based Shen Yun was formed in 2006 to accomplish just that. When communism took power in 1949, traditions were uprooted and the divinely inspired culture nearly completely destroyed. But the artists of Shen Yun came together with the mission to revive that culture through the performing arts.

It is a culture that believes in harmony between heaven, earth, and humankind, the program notes explain. A culture believed to be imparted by the heavens.

“Today, I’ve seen it; I’m very touched,” Mr. Su said. “I don’t think that what our ancestors believed in for thousands of years can be rejected by the people of today.”

Ms. Liu said she staunchly agreed, and it was a great loss for anyone who could not attend.

“[Shen Yun] truly brings out the notion of divine culture transmitted from heavens,” Ms. Liu said. She was blown away by the artistry, and even more so by how genuine the culture presented was.

Because of the communist culture in China today, many people, including her friends, have been taught to reject the traditional culture, and some were even skeptical of seeing Shen Yun, she explained. But seeing it now, there is no denying it is the genuine Chinese culture, she felt.

“I think that if one really calms down and watches the show, you can really experience the genuine manifestation of your tradition and your ancestors’ 5,000-year-old culture,” Ms. Liu said. She mentioned she saw other Chinese audience members in the theater, and it seemed they had come to the same conclusion she did, even giving a standing ovation by the end of the performance.

Mr. Su said he wished more of his Chinese friends could see this with their own eyes.

“I believe that this show will definitely play in China one day. For sure,” Ms. Liu said.