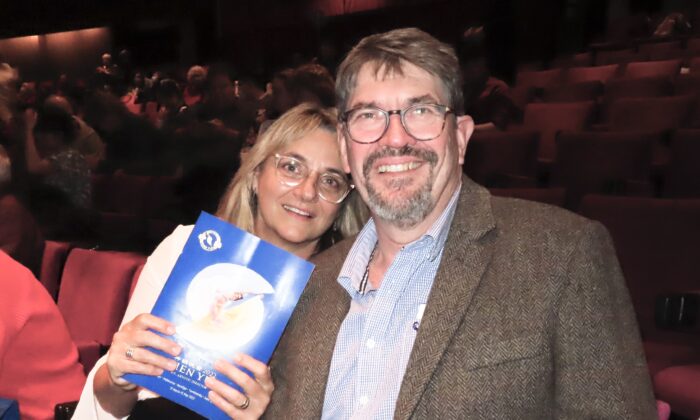 “So much of art in the world today is demoralising and destructive, [but] this is truly uplifting,” Mr. Vuuren said after watching the performance on May 10.

Mr. Vuuren was attending the performance at the Festival Theatre in Adelaide with his wife.

A world-renowned classical Chinese dance company based in New York, Shen Yun is currently touring Australia with the mission to revive China’s traditional culture and its spiritual origins.

“Those central values of truth and compassion, so much more of that is needed in the world,” Mr. Vuuren said.

Through a repertoire of story-based vignettes, the performers showcase tales of courage and sacrifice, integrity and loyalty, compassion and virtue, from ancient China through to modern times, accompanied by state of art animated backdrops and a live orchestra that blends Eastern and Western instruments.

“The music is sensational, it feels like you are listening to a tape recording, but it’s a live orchestra, and everything is beautifully synchronised,” he said.

He was also struck by the piece depicting organ harvesting in China.

The dance portrays a story based on the true events of how Falun Dafa practitioners are killed for their organs in state-run hospitals in China. Also known as Falun Gong, Falun Dafa is a spiritual practice based on the principles of truthfulness, compassion, and tolerance; its followers have been persecuted in China since the regime announced an eradication campaign in 1999.

Mr. Nieuwelaar said it was a shame that the people in China couldn’t see this performance too.

“[While] reviving that for the rest of the world is fantastic, the show cannot be shown in China, which is really sad because I’m sure people in China would love to see more of their own history and their own culture,” Mr. Nieuwelaar said.

The communist regime, over the decades since its inception, has systematically destroyed and distorted China’s 5,000 years of rich, spiritually-rooted culture, including the universal values inherent to it. This year, Shen Yun is touring the world to present “China before communism.”

“I would definitely tell people to come and watch it. It adds the value that we miss out on in modern life and makes you think of things that are really important,” Mrs. Vuuren said.