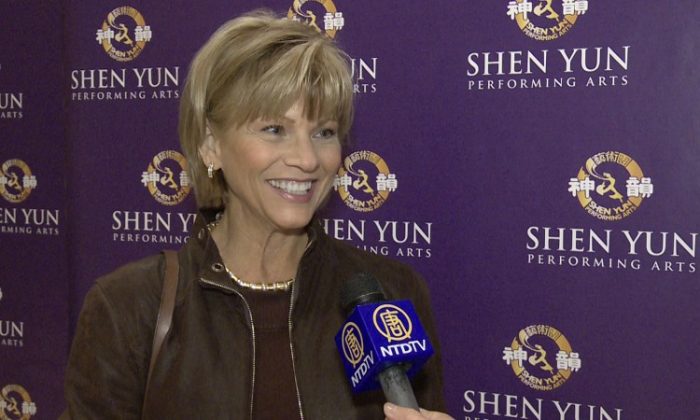 NEW YORK—”The costumes, the choreography, the dancers—the dancers are amazing. The talent—oh my gosh! And it was just, it was wonderful!”

“The show was beyond fabulous,” she said. “We’ve been talking about it for twenty minutes.”

The ancient culture is one that is 5,000 years old and divinely inspired but was nearly decimated by more than 60 years of communist rule in China.

The company utilizes the comprehensive dance form of classical Chinese dance as its core, enhancing it with components including an orchestra that melds classical Western instruments and traditional Chinese instruments and digitally-animated backdrops, according to the company’s website.

“It looked like they were floating instead of dancing on their feet,” said Ms. Dell. “They just moved so smoothly, so delicately. It’s really amazing.”

The seamless transition of dancers interacting with the digital backdrops impressed Ms. Dell.

“I loved it!” She said. The colors of the performance, mostly seen in the handcrafted costumes that adorn the dancers, were “so beautiful,” she added.

“I’m going to tell people how wonderful it is, and then the next time they’re here more and more people are going to want to come,” she predicted. “It’s one of the best shows I’ve ever seen. It really is, and that’s saying a lot.”

Shen Yun Performing Arts, based in New York, has three touring companies that perform simultaneously around the world, with a mission to revive traditional Chinese culture. Upcoming performances in the United States include Chattanooga, Tennessee, on April 24, and Columbus, Ohio, on April 26-27.