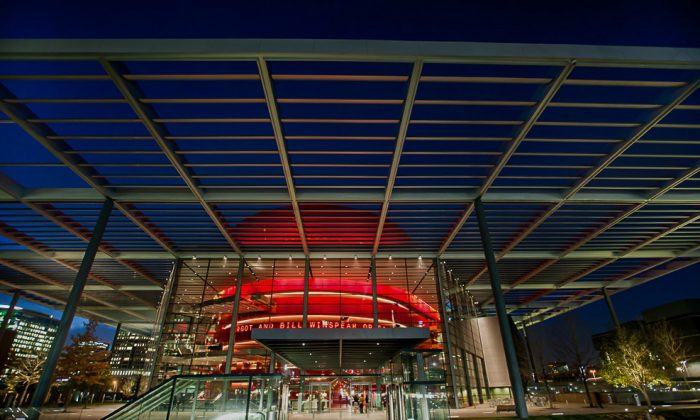 DALLAS—The theater was packed and the audience was lively as Shen Yun Performing Arts performed at the Winspear Opera House on its second to last day in Dallas.

Rosco and Mary Davis nearly didn’t make it to the performance, but were glad they did, and are making plans to see it again next year . They praised the beauty of the performance; the classical Chinese dance, vibrant costumes, and music.

“When they sing, it is heaven,” Mrs. Davis said. “They start to sing and I just get goosebumps. It’s powerful, a powerful sound.”

Anne Gowdy and Donna Clark had tickets in the front row and could see every instrument and every expression on the dancers’ faces. By intermission, they were already making plans to get tickets for the Fort Worth performances coming in March.

“We want to bring a big group of people,” Ms. Gowdy said.

Paula Rose from Houston saw Shen Yun for the third time with Natalie and Barbara Mounts. She loves it so much that it’s become a tradition for her to fly up to Dallas to see the performance.

For Natalie and her mother, this was their fourth year seeing Shen Yun.

“We love it, every single time. It’s a brand new show, and it’s just exciting to see the amazing things they do,” Ms. Mounts said. “I think they step up their game every single year. Last year we thought it was top, the best, and then this year they’ve just topped it again.”

Part of what makes Shen Yun so touching for Ms. Mounts is that even though the artists cannot perform in China—where the divine culture of ancient China was largely destroyed by the ruling communist party—they have brought true traditional Chinese culture to the world’s stage.

The performance touches on the topic in one dance, Ms. Mounts noted, that brought her to tears. “I cried. Through the whole thing,” Ms. Mounts said. “It’s just very moving.”

She found the traditional values Shen Yun presented moving and amazing. “Their principles are more about people and feelings, and were much more important than the products we make,” Ms. Mounts said. “I think that those are amazing values.”