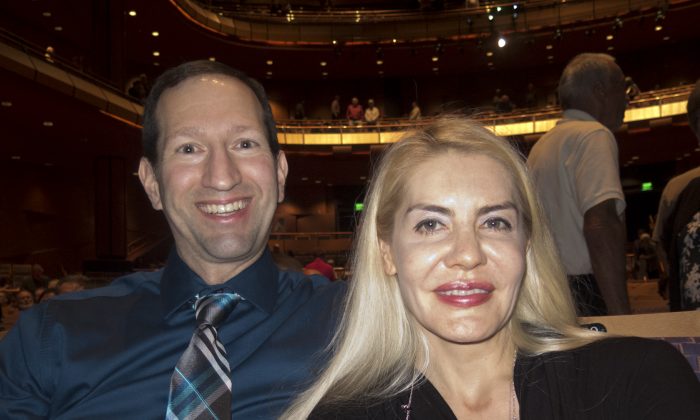 “China was once known as Shen Zhou, The Divine Land. This profound name describes a land where deities and mortals coexisted, and a belief that the divine transmitted a rich culture to the people of the earth,” according to Shen Yun’s website, a non-profit performing arts company based in New York.

A Shen Yun performance features classical Chinese dance, a rigorous, graceful, and richly expressive dance system perfected over thousands of years. A full, live orchestra with both Eastern and Western instruments accompanies the dances, and stunning costumes, rich animated backdrops, and musical soloists round out the performance.

“I love the bright colors and light movement,” said Scott Ferguson, an electrical engineer at Microchip Technologies, who accompanied Ms. Hansom to the performance. “The dancers are so light on their feet and quick.”

“And the dancers have so much flexibility,” said Ms. Hansom. “It is so amazing to see what they can do.”

Mr. Ferguson enjoyed the interaction between the digital, state-of-the-art background screen and the dancers, who appeared to disappear into the screen or jump right out of it.

Ms. Hansom appreciated Shen Yun’s educational aspect, with its dances showing stories and legends from China’s rich culture, as well as some of the dances showing different ethnic groups. She also felt the performance expressed values, morality, and a philosophy of how life should be.

“I think its very refreshing and eye opening,” she said.

“Principles such as benevolence and justice, propriety and wisdom, respect for the heavens, and divine retribution, all come to life, washing over the audience. Originating from Confucianism, Buddhism, and Taoism, these ideals are the essence of traditional Chinese culture,” says the website.

Ms. Hansom is originally from Russia, in a region bordering China.

She saw many Chinese performing arts shows, but nothing like Shen Yun. She appreciates that Shen Yun incorporates some of the modern history of China and lets people know about the restrictions that come with rigid communist systems.

“Right now in China, every store you walk in will have a little Buddha statue, but officially you cannot practice [or have] freedom of spiritual life. You cannot do a lot of things,” she said.

Mr. Ferguson also appreciated both the ancient Chinese philosophies and the depictions of current events in China.

He recommended Shen Yun to others.

“It’s very positive, moral stories [with] bright colors. Something they should see,” he said.

“I will absolutely tell everybody,” said Ms. Hansom. “It’s a must!”

“We have so much negativity in life,” added Ms. Hansom. “It is just so refreshing. Everything is light…the movement is so light. It’s just kind of lifts you up; it’s joy. I love it.”

‘I Laughed, I Cried’

“I laughed, I cried,” said Mrs. Willhoite, who is expecting a child. “I had so many emotions, and even my baby girl was kicking throughout. It was excellent!”

With a smile, she added that her daughter also enjoyed the performance.

Mrs. Willhoite loved the soprano soloists, and she was amazed by the erhu soloist.

She was referring to Lu Sun, a world class erhu soloist, who played a song entitled All for Today.

“The erhu is one of the most important Chinese instruments, with a history of over 4,000 years,” states the Shen Yun website. “Though it has only two strings, it can convey a wide range of emotions.”

“I about lost it! ….I thought it was incredible,” she said.

Mrs. Willhoite attended Shen Yun once before many years ago. This time she experienced a renewed appreciation for the company’s mission.

“I think it has a good message, and I think that it’s very powerful,” she said. “It’s a mixture of compassion and understanding.”

She noted the hard work from all the performers to carry out Shen Yun’s mission and highly recommended others who haven’t yet seen the performance to attend.

“You get passion from it,” Mrs. Willhoite said.

“I don’t know how to explain it, other than you have to go,” she added, “It’s beautiful!”

With Reporting by Youzhi Ma and Sarah Le