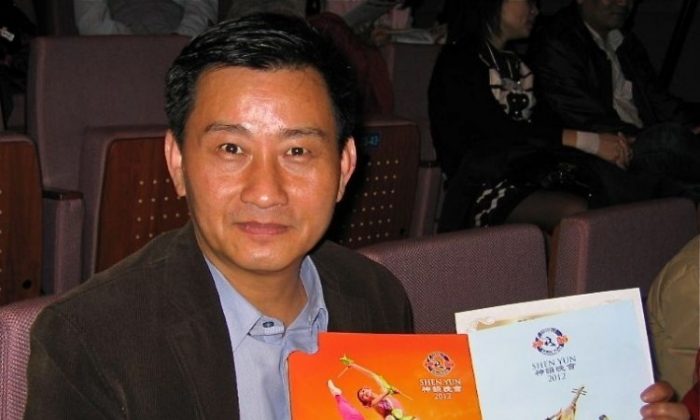 At the grand opening on April 6, Xing-Yu Wang, Board Director of Minchali Corporation, greatly cherished the performance.

“Since the mission of Shen Yun is to revive traditional Chinese culture, it will help the education of our next generations,” Mr. Wang said.

Based out from New York, Shen portrays the essence of 5,000 years of traditional Chinese culture though classical Chinese dance and music depicting a collection of stories, both legendary and modern day.

He elaborated; “The hands, the feet, every single moment, the dancers symbolized professionalism. As such wonderful performing arts could be established in New York.”

One of the programs, Mr. Wang was impressed by was the story-dance, The Dafa Practitioner’s Magical Encounter, which sheds a light on the current state of people practicing Falun Gong in China. He felt that the Chinese communist regime was simply ruthless for it simply wanted to control its citizens. Drawing inspiration from the program, he said “people should work together with compassion, so our world can be more peaceful, more benevolent.”

Besides the authentic classical Chinese dances, a full orchestral ensemble, vocalists, animated hi-tech backdrops, each of these components drew applause from the audience.

“We could see thousands of years of history in a two-hour performance. This is certainly worth every penny. The incorporation of the animated backdrop was very creative. The musical performance by the orchestra, as well as the soloists, was simply top-notch.”