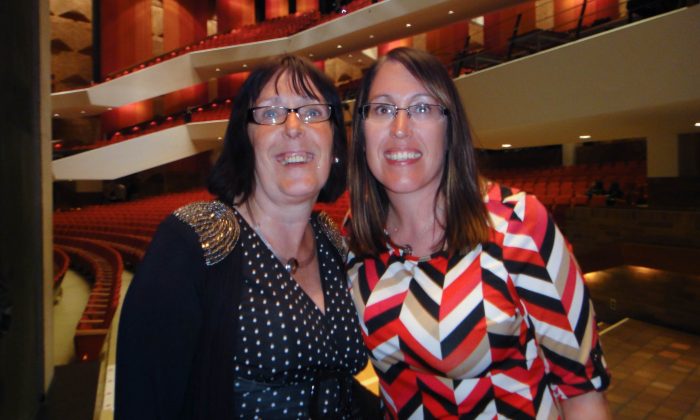 Jackie Petker with her daughter Michelle Petker-Lawrie at the Hamilton Place Theatre on Tuesday, May 10, 2016. (Dongyu Teng/Epoch Times)

HAMILTON, Canada—Shen Yun Performing Arts returned to Hamilton Place Theatre for the seventh year on May 10, taking the audience on a voyage through 5,000 years of Chinese civilization.

It was a really good performance. I walk away feeling completely fulfilled.
— Michelle Petker-Lawrie

Shen Yun Performing Arts, the world’s premier classical Chinese dance and music company, was established in 2006 by a group of overseas Chinese artists committed to reviving the rich cultural heritage of China, which has been all but destroyed by the Chinese communist regime since it came to power in 1949.

This traditional heritage was rich in spirituality and virtues–valuing principles such as benevolence and justice, propriety and wisdom, and respect for the heavens.

Ms. Petker-Lawrie gained some perspective and noticed the depth of meaning in the performance.

As part of its presentations on Chinese history and culture, Shen Yun also brings to the stage the persecution currently experienced by practitioners of the Falun Dafa (Falun Gong) meditation discipline in China.

Ms. Petker-Lawrie was glad to get the opportunity to learn about this human rights tragedy. Her mother felt a deeper appreciation for their life in Canada.

“We complain about little things, about our weather and everything, and we don’t realize how lucky we are compared to the things they have to go through. So it makes you appreciate our lives even more,” she said.

Also in the audience on May 10 were elementary school teacher Jordan Hardy and her mother Anne Hardy, a nurse.

“Everything is wonderful,” said Jordan. “We were just saying that all of the movements are so fluid and beautiful and the colours are gorgeous.”

“I’ve been wanting to see this for years and I’m loving every minute of it. I love the movements and the way their sleeves just all flow. I love how their feet just glide across the floor. It’s very enjoyable to watch,” said Anne.

She also noticed the depth of spirituality in the performance. “It was very positive,” she said noting that the performance was inspiring, making her feel that “there’s something more than ‘here.'”

“If it brings back spirituality to everybody, that’s a good thing,” she said about Shen Yun.

By the end of the performance, she was left with an uplifting feeling “It’s a very cheerful show.”