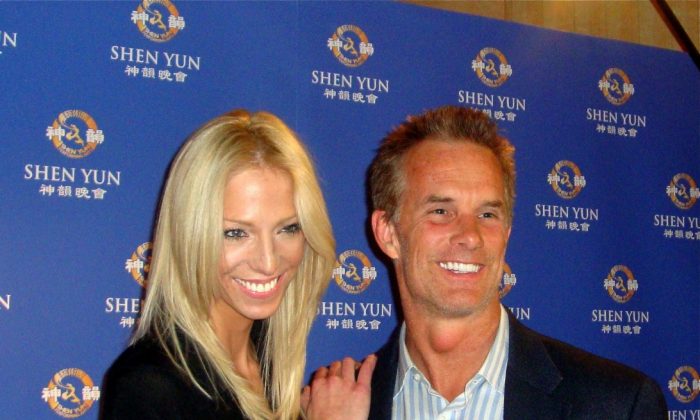 Shen Yun: A Once in a Lifetime Show

CHICAGO—This past Thursday night, April 19, marked the opening of the Shen Yun Performing Arts Show at the Civic Opera House in downtown Chicago.

Many couples have varying reasons to watch Shen Yun. However, most people don’t realize until after they’ve watched the show what Mike Stark and Caitlin Jenks eventually found out themselves; namely, that the show is calming and relaxing.

“It was so relaxing,” said Caitlin, “Especially after a long day at work, it totally puts you at ease and is just so enjoyable. It takes all the stress away.

“I found this to be …. a once in a lifetime show,” Stark told the Epoch Times. “Really, because it’s not like anything I’ve seen before. Probably nothing I’ll ever see like it again. It was very interesting, how there were many small acts, that all kind of contributed to the overall story, but I loved the way they used the animation with the background. I really loved the Monkey King.”

Stark continued when asked about the various parts of the show he found exciting.

“It’s very peaceful, you know if you had a stressful day,” continued Stark. “I would come to see this show because it’s very entertaining and fun. I really enjoyed the music, animation and the dancing was fantastic, everyone seemed to glide on the stage. It was very well done. I would recommend it.”

Stark, whose profession is in advertising operates out of the North Suburbs.

“This was a very unique experience that I would recommend as far as culture goes. If you want to be cultured this is culture,” said Stark.

Stark and Jenks heard about Shen Yun from their friend who works for a local radio station (Channel 560 AM). Shen Yun was strongly recommended to them and so they decided to attend.

“It was very relaxing and heavenly, the girls were so graceful, I loved it!” Caitlin said.