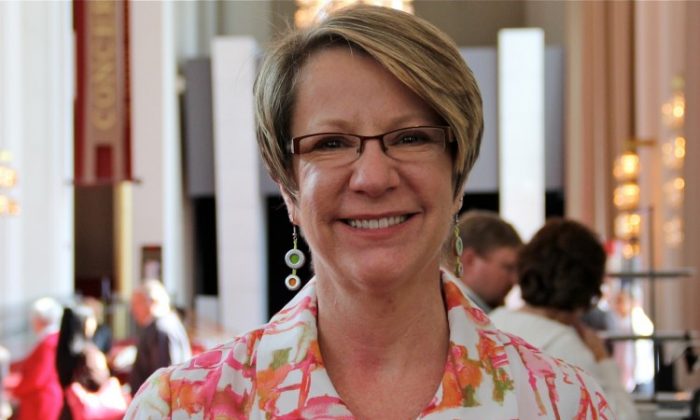 There was a lot of laughter during the humorous scenes, much applause thoughout and an encore for soprano Haolan Geng who sang “Speaking of Predestination.”

Graphic designer Barbara Wilder was in the audience and was disappointed her husband was not able to see Shen Yun with her that day. “I was transfixed,” she said.

Ms. Wilder said Shen Yun was “very deep” and there was a lot in the performance that had appealed to her.

“It was colorful, I loved the music and I liked the history as well,” she said, adding, “I am always amazed to learn about different cultures and I like shows like that. It’s very appealing to me.”

The myths and tales of ancient times also came alive in Shen Yun’s performance. “The personality of it—how they came across, how they were depicted,” she said.

Shen Yun, a New York based company, has as its mission to restore and revive traditional Chinese culture. In a collection of short performances that combine classical Chinese dance, music and singing, the company takes audiences on a journey, “from the Himalayas to tropical lake-filled regions; from the legends of the culture’s creation over 5,000 years ago through to the story of Falun Dafa in China today; from the highest heavens down to the dusty plateaus of the Middle Kingdom,” the Shen Yun website says.

With a graphic designer’s eye, Ms. Wilder noticed the digital backdrops that, through hi-tech projected images, seem to transport the audience to other realms, interacting with the live action on stage in seemingly magical ways.

“That was just … you know the first time that came down I thought ‘what in the world is happening here’ but I loved how it played into the movement on the stage. The dancers … everything was great,” she said.

Ms. Wilder said she and her husband were particularly excited to find out the music was live and not just recorded.

Despite the disappointment of her husband missing out on the Washington performance, Ms. Wilder said she was pleased to hear that Shen Yun was New York-based.

Shen Yun was a “must see,” she said. “Knowing that they’re from New York, I want to make sure that we get up there and see it again.”

Shen Yun Performing Arts will be performing at the Lincoln Center in New York from April 18-22.