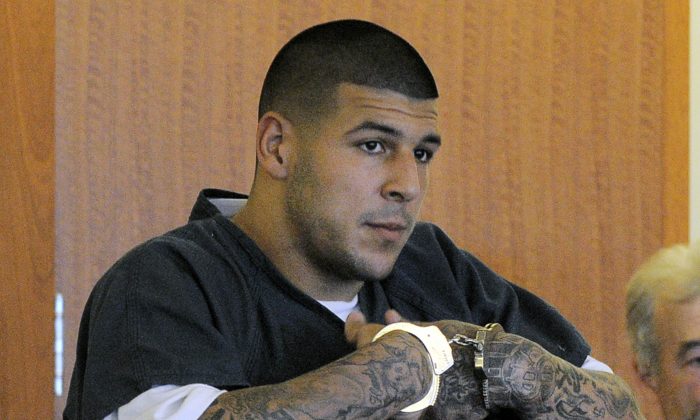 Shayanna Jenkins and Aaron Hernandez may seek marriage while murder suspect and former NFL star Hernandez is in prison in Massachusetts. If Jenkins were his wife, she would not have to testify against him.

Bristol County Sheriff Thomas M. Hodgson told USA Today Sports on Tuesday: “I don’t subscribe to that. I feel that those rights are things that you access on the outside, if you’re a good citizen. … We’ll do everything we can to not have that happen.”

Hernandez is being held in a Bristol County jail, awaiting trial for first-degree murder in the execution-style killing of Odin Lloyd. Hernandez plead not guilty.

Jenkins, his highschool sweetheart and mother of his daughter, spoke with investigators last week, but Hernandez told her to maintain silence, reports ESPN.

In an interview with the NFL Network’s radio show NFL AM on Wednesday, Hodgson said, “We’re not going to revamp our entire security system to perform marriages inside our prison. If you want to get married, what you do is, you stay out of jail.”

Hernandez allegedly drove to the industrial park near his North Attleborough, Mass., with his friend, Carlos Ortiz, Lloyd, and other man, reports ESPN. Lloyd’s body was later found in the industrial park. His attorneys say evidence against him is circumstantial, according to ESPN.

In a separate case, Hernandez is also accused of shooting Alexander Bradley of East Hartford, Conn., in the eye outside a Florida nightclub.

The Hartford Courant reports that Bradley has been subpoenaed to testify in the Hernandez murder trial in Massachusetts.