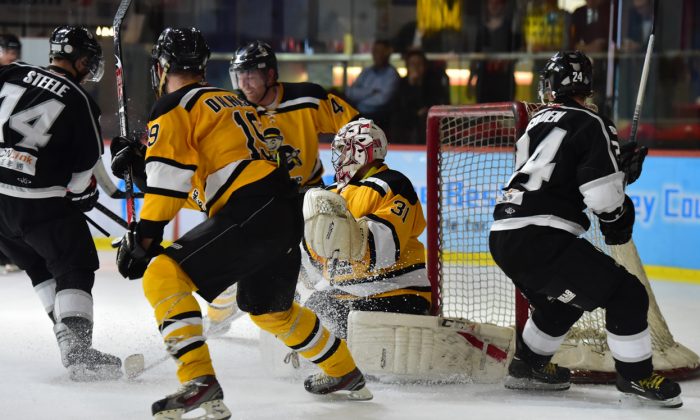 Goalmouth action in the match between South China Sharks and Hong Kong Tycoons in the CIHL in Hong Kong on Thursday Jan 14, 2016. Tycoons scooped an 8-6 win by pulling out 2-goals late in the 3rd session. (Cox/Epoch Times)
HK Ice Hockey

HONG KONG—Kowloon Warriors scored an important win against second placed Macau Aces at Mega Ice on Thursday Jan 14. Still only in 3rd place Warriors are now just 2 points behind Aces and 6 points adrift of the leaders. South China Sharks on 14-points. Sharks slipped up against a reinvigorated Hong Kong Tycoons in a tense last few minutes of play.

Goals by Brendon O’Neill, Gregory Smyth and Darren Winia gave Warriors a 3-goal lead against Aces amidst penalties for 4-Aces players and for two Warriors. in Session-2, Jeff Ceccacci scored twice for Aces but Warriors maintained their 3-goal lead with hits by Michael Yoshino and Devin Welsh to make the score 5-2. With just one goal by Jasper Tang for Warriors in session-3 gave them their 4th win of the season at 6-2.

In the second match, Tycoons shocked the league leaders by moving into a 3-0 lead by the end of the first session courtesy of 2-goals by Niklas Olsson and one by Patrick Walker. Sharks regrouped and hit back to draw level 8-minutes into session-2 with strikes by Eric Molander (2) and Jordon So but Tycoons pulled ahead again through Patrick Henderson in the 12-minute before Sharks hit back a minute later with a conversion by Julien Jorand to end the session on level terms (4-4).

Session-3 was a real humdinger with the tempo increasing to a crescendo as the session progressed. Tycoons drew ahead early in the 3rd stanza with another strike by Henderson but Warriors moved ahead at 6-5 after 5-minutes with scores by Ryan Wong and So’s second. But Tycoons would not lie down leveling again at 6-6 with a goal by Patrick Walker. Frantic play in each direction ensued to try to hit the winner. However, a mistake by Sharks penalized at 13:44 into the session for too many players on the ice and Ryan Wong was sinbinned to serve the penalty. This gave Tycoons an advantage which they capitalized on with a goal by Lucas Eshleman assisted by Jim Fanstone. Sharks responded putting huge pressure on the Tycoons defence but Eshleman broke again, charging down the right wing slotting he puck into an empty net settling the match at 8-6.

Three star awards were received by O’Neill and Smyth for Warriors and Ceccacci for Aces, and in the second game to Shark’s Molander and Tycoon’s Eshleman and Henderson.