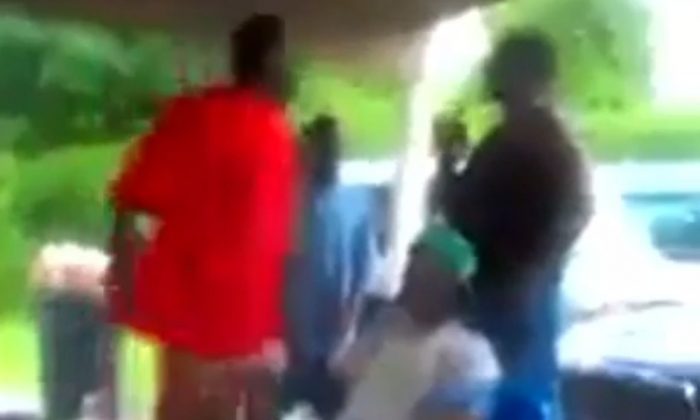 A screenshot shows a scene from the Vine video.
News

A video that’s going viral, called “Sharkeisha’s Father,” shows a man punching another man in the face before the other drops to the ground. According to social media users, the man’s name is “Whaleandre.”

The name of the video is in reference to a teenager named Sharkeisha, who was shown in a viral video punching and kicking another girl. It is highly unlikely that the man punching the other man is the girl’s father.

There isn’t much context provided about the Vine video, but it shows a man in a red shirt throwing a haymaker punch at another man while his hands are down. The victim immediately collapses onto a car.

Users in the background yell, “World Star!” in reference to the website World Star Hip Hop, which features street fights.

A number of Twitter users commented on Monday and Tuesday about the new video.

“Boy, why’d it look like his head fell off his neck,” wrote one.

The victim in the attack, 17-year-old ShaMichael Manuel, said that while the incident humiliated her, she forgave her assailant. Her mother, Olivia Henderson, did as well.

According to KHOU-TV and an interview with the Huffington Post, Manuel said it was over a boy.

“A guy down in Houston made a rap video about it,” Henderson told the Huffington Post earlier this month, adding that users online made “atrocious” comments about her daughter.

Henderson said that people are glorifying the violence in the video. “I’m not angry at them. As a mother, we want your kids to do right, but I would hope this will be a learning experience,” she said, adding that “bullying needs to stop. Videotaping assaults need to stop, as well as people glorifying it.”

But despite the assault, Manuel and Henderson say they forgive Sharkeisha. “I forgive you,” Manuel told the Huffington Post.