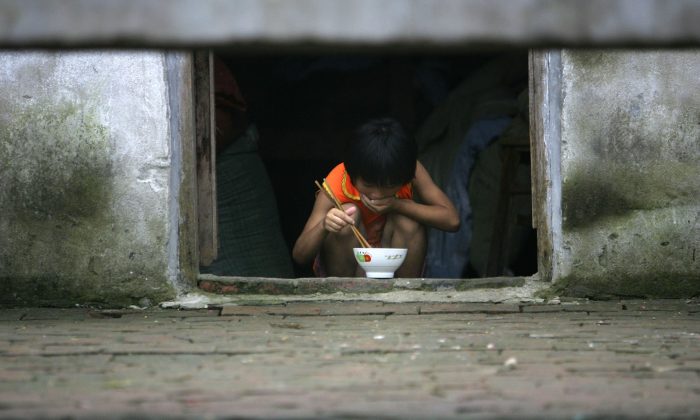 A Shanxi lady in her 70s has dedicated 46 years of her life to caring for abandoned children. Recently, local officials removed the children currently in her care without explanation and despite the fact that she had legally adopted the majority of them.

Kong Zhenlan from Jiuji, a village in Shanxi Province, has adopted more than 70 children since she was 26 years old. While many of the children suffered from various levels of disability, such as cleft lip and cleft palate, cerebral palsy, autism, or ADHD, there were seven who received a higher education and are now doctors, teachers, and a hairdresser.

On June 2, Kong’s son, Ming (pseudonym) told the Chinese edition of The Epoch Times that the local authorities swooped in and removed all 28 children, including those in kindergarten, elementary school, junior high school, and high school, without prior notification.

Kong’s foster home was once the pride of the area. Local officials honored her for her charity work and the media covered her story as early as 2015.

But, at approximately 8 a.m. on June 2, buses and police arrived in the village with at least 200 people in uniform and plainclothes, and blocked the village exit.

Ming said, “They cut off our electricity, and blocked the mobile phone signal. Without our consent, they forcibly removed all 12 handicapped children from [our] home.” The rest were taken from their schools.

Without knowing this would happen, the children were in shock. The older ones tried to fight with the officials but were pressed to the ground. Some villagers were unhappy about what was happening and took videos. The police forcibly erased the videos, according to Ming.

Another group of people claiming to be from the Civil Affairs Bureau picked up the children from the kindergarten at 10 a.m..

They later learned that the children were taken to a welfare center in Jinzhong City, arranged by the Civil Affairs Bureau and the public security department of Qi County.

Kong Is the Legal Guardian of 24 Children

Ming explained to The Epoch Times that Kong and her husband, both catholics, started adopting children in 1982, especially those with birth defects.

She would earn money selling handicrafts and doing low paying jobs. After her husband passed away in 2018, Kong lost her income source. She has been relying on donations of food and clothing from the local community.

She sometimes had to find food for herself by picking through the garbage, but she saved the regular food stock for the kids.

Kong never expected to dedicate the past 40 years to these children, a local media reported.

Ming said they believed that the birth mothers were forced to give up on the kids; but to give their child an opportunity for a decent life, they sought help from Kong.

He said, “The birth mothers never gave their names, but my mother believes it’s her mission and promise in life.”

Kong disagreed. Of the 28 children in the home, Kong had registered 24 of them as legal residents of the household. She is the legal guardian of this big family. They are no longer orphans, and the foster home is not an entity subject to regulation of the Civil affairs department.

Her foster home seemed to have the issue resolved.

However, on April 12 local officials started contacting the foster home again, demanding that all the children to be sent to the welfare center. Kong still disagreed with them.

However, they started to question the children through the schools trying to find out if any would like to leave the foster home. Many kids expressed clearly their unwillingness to leave.

Ming emphasized that, for years, the local government has provided almost no assistance or aid to the home. Once in a while, during the Chinese New Year, the county mayor would pay a visit and bring a few goods.

Any substantive help from the government is lacking, but threats and warnings occur instead. “They don’t like my mom taking care of these children,” Ming said.

Governmental Subsidies My be at the Root

According to a 2015 Chinese report, local authorities did not recognize Kong’s foster home because Chinese law stipulates that a handicapped person could adopt no more than three foundlings with birth defects. Kong had developed Kyphosis that caused a curvature of her spine from years of hard work.

Therefore, Kong’s foster home has not received any government subsidies. Kong was advised by the officials to send the children to the city welfare center.

China started issuing living allowances to each abandoned orphan across the country in January 2011, at a monthly rate of $27, $40.50, and $54 in east, central, and west China respectively. This means that each child in an orphanage will increase the facility’s government subsidy.

The Epoch Times tried to call the Qi County Civil Affairs Bureau and Jinzhong City Welfare Center about this matter, but the call did not go through.

Gao Miao and Gu Xiaohua contributed to this report.