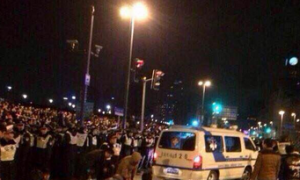 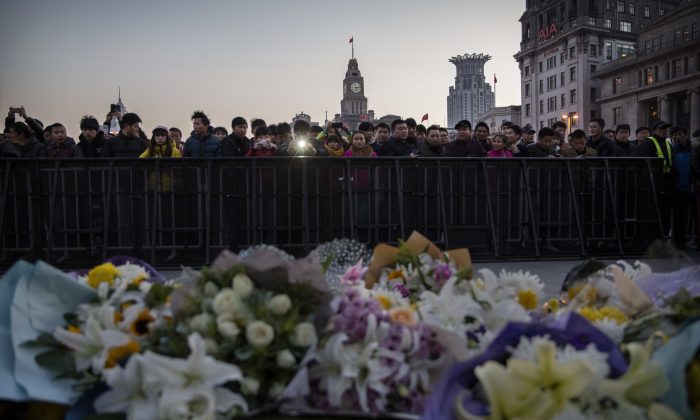 Chinese mourners gather at a makeshift memorial at the site of a stampede on Jan. 1 on the Bund in Shanghai, China. Officials who enjoyed an expensive Japanese meal at a restaurant nearby are coming under scrutiny. (Kevin Frayer/Getty Images)
Epoch China Blog

The maxim that “silence is golden” has been given a new meaning in Shanghai, where authorities have remained mum on the cause of the city’s New Year’s Eve stampede which resulted in the deaths of 36 people, while at the same time putting the municipal propaganda department into overdrive by forbidding journalists from any independent reporting of the incident.

But a ray of hope came from an unexpected quarter recently, when the Shanghai branch of the Central Commission for Discipline Inspection, the Party’s antigraft watchdog, released a statement saying that it was opening an investigation into the news reports that officials from Huangpu District indulged in an expensive restaurant on the Bund on Dec. 31.

On Jan. 9, Caixin, a liberal Chinese magazine, first reported that officials from Huangpu were eating at an expensive Japanese restaurant called Utsusemi while the New Year celebration was turning into a disaster.

The restaurant is a state-owned company: the Assets Supervision and Administration Commission in Huangpu controls it through an investment group, and officials popping in are able to simply put their bills on the state tab, according to Chinese press reports.

To add insult to injury, the price tag at the restaurant—a choice of between three different pre-fixe menu options, is either 1,888, 2,888 or 3,888 yuan per person (about $305, $466 and $628). All dishes are prepared from materials shipped by airplane directly from Japan, according to Sina, a news web portal.

Such extravagant spending is far beyond the salary of a normal government official, supposed to be the humble servant of the public.

Sina’s report asked: “Who are these officials who are enjoying the night view while having a feast?”

Zheng Enchong, a Shanghai-based lawyer, said in an interview with Epoch Times that there are all manner of rumors in Shanghai about what may have happened before the disaster struck.

“I have heard that Jiang Zemin and his entire family were enjoying the night on the Bund on New Year’s Eve. So there were a lot of plainclothes guards,” Zheng said. “Why were there suddenly more people at 11:30 at night? Because Jiang was there, with possibly hundreds of security guards.

“If Jiang’s entire family was there, there must be a huge distance between them and the other people. With a sudden large contingent of security forces, crowds would naturally be pushed to the side,” Zheng said.

“I’m not sure if this rumor is true, but it shows that regular people don’t like Jiang very much.”