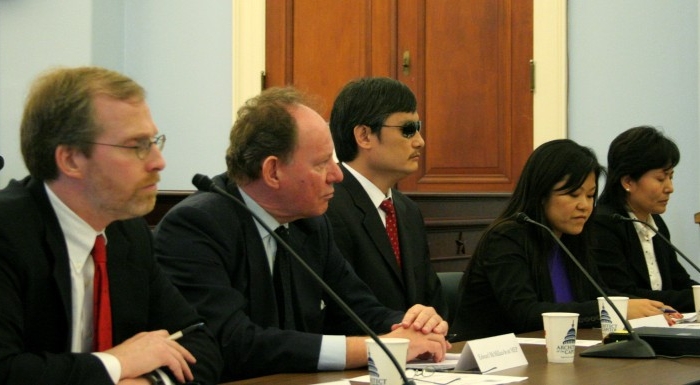 On June 1, Shanghai lifted its draconian COVID-19 lockdown that began in late March, during which production activities were halted, businesses shut down, and residents were barred from leaving their homes.

Since June, representatives from 78 massage parlors in Shanghai have gone to local authorities six times seeking financial help, but were rejected and brutally treated, they told the Chinese language edition of The Epoch Times in recent interviews.

They are employees and business owners of massage parlors, most of whom are visually impaired or blind. Giving massages, for many of these people, is their singular choice of vocation and only way to earn a living.

This group of vulnerable people has historically been neglected by the Shanghai authorities, and they are banned online or on other channels, according to one of the representatives.

Mr. Liao (a pseudonym) is the owner of a massage parlor in Pudong District, Shanghai. He recounts what happened when the group visited the local authorities after they tried in vain to get help from the local government.

Liao said in a phone interview with The Epoch Times on July 27 that most of the 78 massage parlors were shut down under the stringent zero-COVID policy and that many of them are on the brink of bankruptcy. They hoped that they could be granted rent subsidies, pandemic subsidies, and approval for immediate resumption of work by the local government, as it had allowed other businesses to do.

Since the end of March, there hasn’t been much business due to the lockdown measures, Liao said.

Thinking that the local Disabled Persons’ Federation (DPF) would help them, he and five business owners, went to the DPF Shanghai office on June 6, June 14, and June 21, seeking help, but to date haven’t received any assistance from either the DPF or the local government.

When there was no offer of help, on June 29, about 50 massage parlor owners and blind masseurs went to the DPF’s Shanghai office.

People also went to the DPF on July 6, and July 27, to see leaders from the DPF and state their difficult situations.

“They [local police] did not allow us to enter the building,” Liao said. He recalled that there was a visually impaired woman whose toe was jammed by the gate and bleeding. Her foot had a bone fracture, but she didn’t receive any medical treatment, and she was unable to walk for over a month.

“The police tricked us into entering a nearby courtyard by saying that the DPF’s leaders would meet us in that compound. After we got to the compound, they locked us in there. A dozen police stayed inside, and another dozen police were outside,” Liao said. He told the publication that they were not allowed to take photos or shoot videos of what was happening. They were kept behind closed door for three to four hours, and not allowed to go out to get some lunch.

“Ninety-nine percent of us blind people or people with visual impairment rely on giving massages for a living; we don’t have any other employment option.

“We are self-sufficient and work hard with our own hands, and we usually do not seek help from the Disabled Persons’ Federation (DPF). This time due to the lockdown, we have no way to survive; we are bankrupt,” Liao said.

“But we need help; without help, we are not even able to leave our homes. Many a time we open our eyes wide, trying in vain to see the beauty of the world and see the difference between sunrise and sunset. Now the police bully us like that,” Liao said sadly.

He told The Epoch Times that their online posts and video footage have been removed from China’s online platforms.

According to video footage that The Epoch Times has access to, a group of people held banners outside an office building, chanting “We disabled people need subsidies, we need to survive, we want to see leaders of the DPF.” But they were shoved, dragged, and pushed by police. Blood can be seen on the ground in the video footage.

The Epoch Times is not able to verify the authenticity of the footage.

An online statement, dated July 15 and allegedly posted by the Shanghai DPF, claimed that it responded to the request by the massage parlor owners and employees on June 24, offering help to them. But Liao told The Epoch Times that it was “fake news.”

The Epoch Times reached out to the Shanghai DPF on July 27, and the woman who answered the phone asked our reporter to leave contact details but didn’t provide any information. There has been no reply from the Shanghai DPF as of the publication of this article.

The Status Quo of the Visually Impaired in China: Reports

There are 17.31 million people with visual impairment in China, according to official data from the China Association of the Blind, which was established in 1953. This group of people is probably the most neglected and unheard group in China.

The Borgen Project, a nonprofit organization headquartered in Tacoma, Washington, published an article in July 2021, titled “9 Facts About Disability and Poverty in China.” The article states that unemployment, lack of education, poor access to  healthcare, and discrimination are among the “numerous” challenges these vulnerable people face in China.

The Beijinger, a Beijing-based China news portal, published a report in June 2022 on the history of blind massage in Beijing, which acknowledges that people with blindness and visual impairment, one of the largest disabled groups in China, “still lack access to employment opportunities.”

It says that blind massage in the country dates back to the 1950s and that massage parlors emerged across the country in the 1990s. Giving massages is a way out of poverty and unemployment for some people with visual issues. However, “there is still a way to go before this group can enjoy the same freedom of work and daily life as people without disabilities,” the article says.

Another report, published in January 2022 in the Journal of Visual Impairment and Blindness, reveals that the Chinese government “promoted employment of people with visual impairments at the start, but, as the system of the blind massage gradually took shape, it restricted these individuals from choosing a career freely.” It finds that the Chinese government’s blind massage policy is “discriminatory” and calls on China to “promote institutional reforms to provide better education and employment for people with visual impairments.”

Zhao Fenghua and Gu Xiaohua contributed to the article.