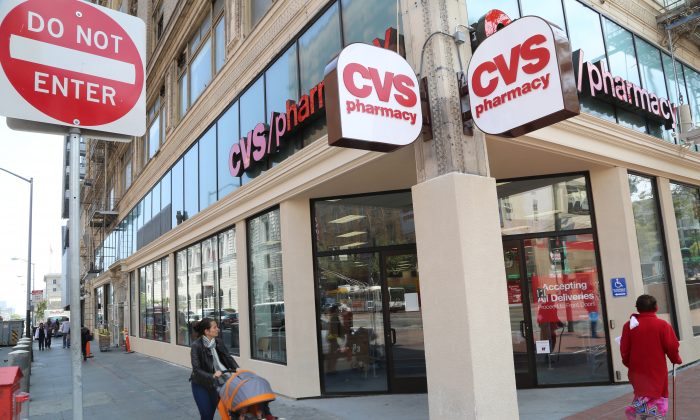 Pedestrians pass by a newly constructed CVS pharmacy at the corner of Market and 7th Streets in San Francisco, July 30, 2013. The chain store, slated to open in mid-August in the South of Market neighborhood, has replaced a check-cashing outlet, cafés, and a liquor store that shut down at the same location. (Christian Watjen/Epoch Times)
Northern California

SAN FRANCISCO—With dozens of IT companies and thousands of new residents continuing to stream into the Mid-Market neighborhood, Supervisor Jane Kim does not want to see the formerly blighted area turn into a box-store paradise overnight.

“It’s very important that we take affirmative steps now to protect our vital small businesses and arts organizations that have contributed to the vitality and character of the community,” said Kim.

A resolution that passed Tuesday at the Board of Supervisors, would, for 18 months, require property owners who want to open a formula retail store between 6th Street and Van Ness Avenue to apply for a conditional use permit.

Currently, the neighborhood has three fast-food establishments and two pharmacies, which are formula retail.

Formula retail is defined in San Francisco as a chain store with at least 11 outlets in the United States that have a similar appearance and offer the same goods and services; pending legislation would expand that definition globally.

Kim stressed that the legislation would not establish a prohibition, but a conditional use zone that looks at each case, allowing for exceptions. For example, food retail is exempt from the zoning control.

Legislation to impose zoning controls for formula retail in five districts have already passed or are pending at the Board, with the strictest being the limitations in Hayes Valley.

Kim and others fear that chain stores, with their competitive advantage, threaten to push out small local businesses and organizations.

At the same time, the Mayor’s office and several city agencies are studying the economic impacts of formula retail citywide.

Jim Lazarus, senior vice president for public policy from the San Francisco Chamber of Commerce, in a letter to President of the Board Supervisor David Chiu, criticized any zoning controls prior to the completion of the study.

He sees it as unnecessary and duplicative to require the property owner to complete and pay for economic impact analysis for Market Street, while the city is doing the same.

“This requirement would create uncertainty and hardship for those property owners who have taken a giant leap of faith and invested enormous capital,” Lazarus said.

Rather than pushing out existing local stores, “a formula retailer is often an anchor in a commercial corridor, and its economic activity lifts neighboring, non-formula retailers to create a balanced, sustainable commercial environment.”

The resolution passed unanimously at the first reading.