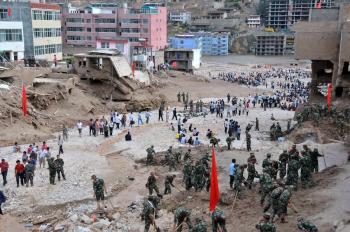 Chinese rescuers search for survivors in Zhouqu, in northwest China's Gansu province on August 8, after a deadly flood-triggered landslide. At least 127 people were killed and nearly 2,000 missing. (STR/Getty Images)
China

At least 127 people were killed and about 2,000 went missing after severe floods and mudslides hit in northwest province of Gansu China.

About 50,000 people have been affected with death tolls likely to rise.

"That was about midnight, so some people must have been in their homes, asleep and didn't know what was happening," Reuters quoted a Zhouqu resident as saying by telephone.

The disaster occurred mainly in Gansu Province, part of the Tibetan autonomous region.

Across China, the country's worst flooding in a decade has killed more than 1,100 people this year, with more than 600 still missing. The floods have caused tens of billions of dollars in damage across 28 provinces and regions.