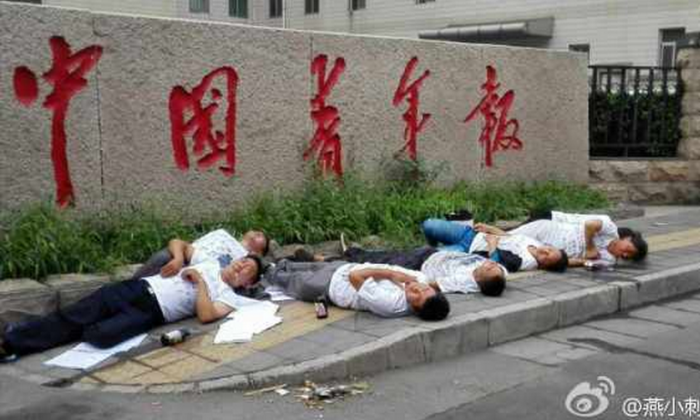 Seven petitioners lay on the ground, seemingly unconscious, several appearing to foam at the mouth, after drinking pesticide in a group suicide attempt outside the offices of the China Youth Daily in Beijing on July 16. They staged the attempted suicide in protest of their houses being demolished with little compensation. (Weibo.com)
China

Seven people engaged in a dramatic group suicide attempt in front of a major state-run newspaper company in Beijing on July 16, downing vessels of pesticide to express their grievance and frustration at the alleged theft of their houses by local Party officials.

The incident appeared to be designed for maximum public impact. At around 8 a.m on Wednesday, the seven stood in a group outside the office of the China Youth Daily, a state-run paper, and each drank a bottle of pesticide, according to the state-run Beijing News.

The four males and three females were sent to three hospitals and all subsequently recovered.

Photographs posted online showed the men and women, all in white shirts with black writing across the front explaining their complaints, lying on the ground, unconscious. Several appear to be foaming at the mouth, while bottles of pesticide and papers lie on the ground.

All were petitioners from Qingyang Town of Sihong County in the eastern coastal province of Jiangsu, reports said. The local government there forcibly demolished their houses and provided them very limited compensation, they say. Such incidents happen regularly across China.

Both the protesters on Wednesday and a dozen of other victims of forced house demolition in Qingyang Town have petitioned—that is, brought their grievances to—the local authorities many times, but have never received an adequate solution. Instead, local Party officials illegally detained and even tortured them, they say.

“The government stole my house. My family has petitioned many times but got no result. The court doesn’t take our case either. We have nowhere to go, and are forced to take such extreme methods,” said Wang Jianbing, husband of Zhang Chengmei, one of the seven petitioners, in a telephone interview with Epoch Times

Forced housing demolitions to make way for real estate development, coupled with the lack of proper compensation, have left many in the town homeless, the protesters say. “Our house was stolen and the compensation is not reasonable. It’s too little,” the wife of Cai Fuxi, one of the seven petitioners, told Epoch Times.

She added, “Once my husband appealed to the government our situation, he was detained in a small dark room without food and drink. He wasn’t even allowed to sleep.”

Mrs. Zhu, a fellow villager of the seven petitioners, suffered similar treatment. Mrs. Zhu told Beijing News that over 4,300 square feet of her family property, including a home and a supermarket, were forcibly demolished last November without her permission. The houses were bulldozed before Mrs. Zhu had even moved out, destroying all her belongings under the collapse.

“How great are the grievances they must have suffered!” exclaimed Ding Laifeng, a veteran media figure in China, on Sina Weibo. Many Chinese Internet users expressed similar sentiments, appearing to sympathize deeply with the petitioners and condemning the regime.

“A government that forces people to their death should truly go hell!” Ding Laifeng wrote.

Other group suicides, or attempted suicides, have taken place in Beijing recently, for many of the same reasons as the current incident.

On June 24, 2014, five petitioners drank pesticide in front of the Central Discipline and Inspection Commission, the Party’s anti-corruption agency, in Beijing.

On March 26, 2014, nine petitioners drank pesticide outside Zhongnanhai, the central headquarters of the Chinese Communist Party in Beijing.

On Dec. 29, 2013, six petitioners drank pesticide after throwing fliers printed with their grievances over Tiananmen Square in Beijing.

On Dec. 10, 2013, 12 petitioners drank pesticide at Qianmen, part of Beijing to the south of Tiananmen Square.