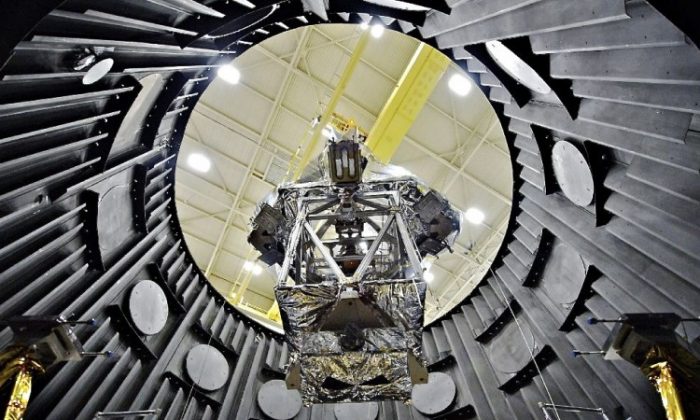 Flying settlers to off-world colonies could become a reality if some of NASA’s latest programs come to fruition. NASA’s Kepler Mission has already found 61 potentially habitable planets, and that number has been steadily rising. Meanwhile, researchers are building a star-ship capable of interstellar travel under the 100 Year Starship program, headed by NASA and the military’s research branch, DARPA.

For Jill Tarter, who directs the SETI Institute’s searches for intelligent life elsewhere, these are signs of years of work coming to fruition. “After all this time, it’s really gratifying to actually have a better idea of where to point the telescope,” she said.

The SETI Institute is a private, nonprofit organization that has set out to explore and understand the prevalence and nature of life in the universe. SETI has had projects sponsored by NASA, the National Science Foundation, and the Department of Energy, among others.

After convincing the world they aren’t connected with the guy wearing a tinfoil hat raving about Roswell, the organization has established credibility as an integral part of searching for life and habitable planets beyond our own.

The organization is now gearing up for SETIcon 2, a conference to be held in Santa Clara, Ca, from June 22 to 24. Tarter said exoplanets will be a big topic, but it won’t all be charts and theories. They’re also inviting science fiction authors and former astronauts to talk about the interplay of science and imagination.

And the interplay of science and imagination is something that doesn’t get its due respect. Tarter noted that with space flight, for example, it went from imagination, to science fiction, to a government project, and now to the commercial market.

Deep space flight, and the search for habitable worlds, are next on the list.

Tarter was among those who organized the 100 Year Starship program, which is being propelled forward by different hopes among its stakeholders. DARPA wants it to advance current technologies much like the journey to the moon did, while NASA wants to use it to rekindle interest in STEM (science, technology, engineering, and mathematics) among students.

There is quite a bit of overlap among systems needed for interstellar travel, and systems that could have value here on earth. Among these are life support systems, closed ecosystems, and sustaining human life in a star-ship-sized space with the absolute minimum of energy use.

But Tarter has higher hopes yet. A program for interstellar travel and the colonization of habitable worlds ties closely with finding life on planets other than our own.

She said if life is found beyond earth, “then we know that it’s going to be ubiquitous throughout the universe.”

“In physics you count one through infinity, so if you only have one example of something and that’s all you have—life as you know it on this planet—you don’t know whether it’s unique,” Tarter said. “But as soon as you find a second example, you can begin to make an estimate as to how many there are, and there will be many.”

“If some of that life is intelligent and technology-using, then we can calculate our place in the cosmos and see how we fit in,” she said.

A large part of SETI’s research is around scanning for signals that could point to life somewhere other than earth, in the universe. The organization’s research has been referred to as “the archaeology of the future.”

“Any signal that we receive, traveling at the speed of light, would take a while to get here. If there is any information encoded, it would be telling us about their past,” Tarter said.

But even a vague or indecipherable signal would be useful, she said, as it could mean, “it’s possible for ourselves, as a technological civilization, to survive for a very long time.”

It would suggest, she added, “it’s possible for us to have a future.”

And for today’s society, which is just beginning to explore technology allowing for space flight and computer systems, it could be a ray of hope.

“It won’t solve our problem, but it will show us … there is a path to becoming old—becoming a long-lived technological civilization,” she said. “It would be incredibly motivating and positive to see that it’s possible to get beyond our technological adolescence where we find so many reasons to have negative feelings about the future.”

The search for life elsewhere could also explain a lot about life itself. Researchers are often baffled to find what are known as extremophiles—microorganisms capable of living in environments that were thought to be inhospitable to life. Among these are microbes living in nuclear waters, boiling battery acid, and arctic ice.

“Microbes are really getting the respect they deserve, and we’ve begun to appreciate that the conditions that are conducive to life are far broader than we have ever imagined,” Tarter said. “In fact, there is probably a lot more inhabitable real estate out there than we would have once ascribed.”

She added, however, “Those are the microbes, and the team I work in has been interested in finding a mathematician.”

Thus, SETI has been scanning for signs of specific radio and optical signals. It has also been scanning more planets for bio-signatures, which includes finding a candidate planet, imaging it, and then conducting a chemical assay of its atmosphere.