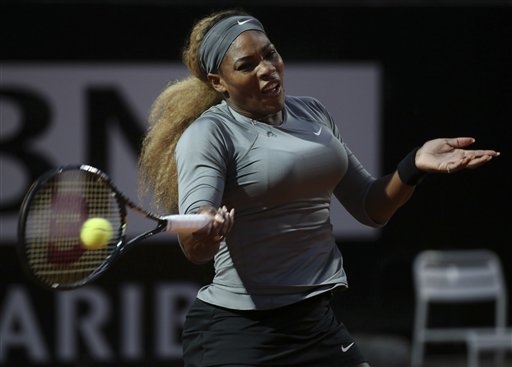 Serena Williams returns the ball to China's Shuai Zhang during their match at the Italian open tennis tournament in Rome, Friday, May 16, 2014. (AP Photo/Gregorio Borgia)
Sports

Serena Williams will try to exact revenge on Ana Ivanovic, who knocked her out of the Australian Open earlier this year.

The pair meet in one of the semifinals of the Italian Open on May 17.

The first match between Sara Errani and Jelena Jankovic is slated to start at 6 a.m. EDT (12 p.m. CEST).

Unfortunately there aren’t any television channels listed on which to watch the match.

Live streaming will be available via WTA.

Serena Williams is cruising again after being slowed by a left thigh problem.

The other semifinal will pit local hope Sara Errani of Italy vs. 2007 and 2008 Rome champion Jelena Jankovic.

The 10th-seeded Errani is attempting to become the first Italian to win the tournament since Raffaella Reggi took the title 29 years ago in Taranto.

The last Italian man to win was Adriano Panatta back in 1976.

Li had won all six previous meetings with Errani but she was unusually inconsistent this time, committing 52 unforced errors to Errani’s 21, and appeared rattled by a close call from the chair umpire early in the third set.

Errani celebrated by waving her arms to incite the crowd.

“I did well not to get carried away by the euphoria,” Errani said. “It’s difficult to describe how it felt at the end. The fans were incredible.”