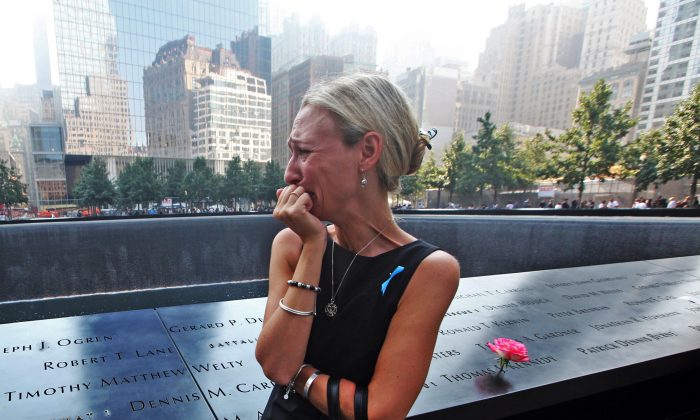 Carrie Bergonia of Pennsylvania looks over the name of her fiance, firefighter Joseph Ogren at the 9/11 Memorial during ceremonies for the twelfth anniversary of the terrorist attacks on lower Manhattan at the World Trade Center site on September 11, 2013 in New York City. The nation is commemorating the anniversary of the 2001 attacks which resulted in the deaths of nearly 3,000 people after two hijacked planes crashed into the World Trade Center, one into the Pentagon in Arlington, Virginia and one crash landed in Shanksville, Pennsylvania. Following the attacks in New York, the former location of the Twin Towers has been turned into the National September 11 Memorial & Museum. (Photo by Chris Pedota-Pool/Getty Images)
New York

While the world was still reeling from 9/11, and Ground Zero cleanup efforts were underway, a last, lone survivor was found underneath the rubble.

Rescue workers and first responders didn’t just take care of human lives, they also found a lone Callery pear tree burnt and covered in rubble. The only thing left of the tree at that time was an eight-foot wounded survivor with cracked branches and a charred body.

The tree, known as the Survivor Tree, stands at the World Trade Center memorial, unmarked by any plaque, but grabs attention and stands out from the oak trees that surround it.

The tree was discovered in October 2001 in bad shape, Forbes reported. There are other pear trees like it in New York City, favored because they grow upwards and don’t droop, and noticeable by vivid white buds. This particular one was placed within the former World Trade Center’s plaza.

“All the upper branches on this tree were shattered and torn off. This entire tree was no taller than eight-feet when we got it. It was what we would consider mortally wounded,” said Robert Zappala, former manager of the City Nursery for the New York City Department of Parks & Recreation, via a video by Narratively.

It was removed from Ground Zero and taken to Van Cortlandt Park in the Bronx, so that the New York City Parks Department could go to work on helping the tree recover.

Beneath the scarred body new growth, smooth and glossy, appeared as the branches grew outward.

The 40-something-year-old tree was deemed healthy enough to return home to lower Manhattan at the end of 2010.

“So when we saw this tree it gave us a lot of inspiration. It’s the last living thing to get out of that site,” said Ron Vega, director of design and construction for the National September 11 Memorial & Museum.

The video shows the emotions of the people involved in the tree’s recovery process. It was an emotional day when they finally returned it to the site. “This means that it’s real. This means that we’re gonna bring her home. With that comes the memories of that fact that it had to leave in the first place,” said Vega.

This pear tree represents to me the ability of not only an organism to regrow and thrive, it also represents how our great city of New York is. That yes, we will take a hit but, but we are a survivor city,” said Zappala.