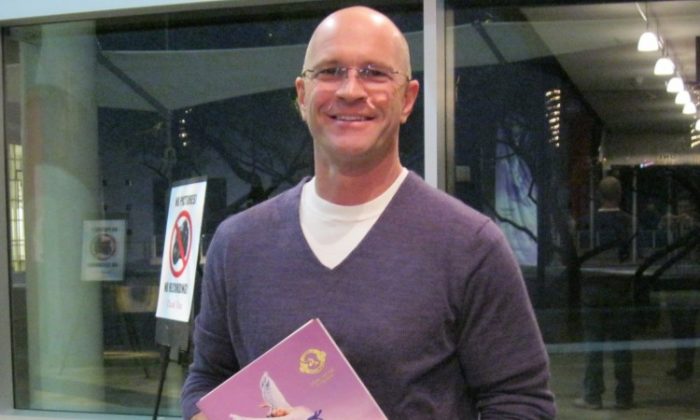 Senior VP on Shen Yun: ‘There’s a buzz about it’

Mr. Hoffman described the performance as exciting and artistic; he said he loved the dance and the art.

MESA, Ariz.—Audience members were roused to a standing ovation after watching Shen Yun Performing Arts in an evening performance at the Ikeda Theater in the Mesa Arts Center March 2.

Tim Hoffman, senior vice president of worldwide sales for Accuvant, an international Internet security company, was in the audience.

He feels that people are talking about Shen Yun.

“Some of our family in Michigan has seen the show. I was just in New York and they were advertising it all over, so there’s a buzz about it,” he said.

Mr. Hoffman described the performance as exciting and artistic; he said he loved the dance and the art.

“It’s very tight—beautiful. The backdrop is great; [it] ties in nicely with the dance and the costumes,” he said.

A Shen Yun performance is a feast for the senses. The world’s foremost classically trained dancers depict millennia-old legends and modern stories of courage through a collection of pieces—each with distinct, colorful costumes—while accompanied by a orchestra and complemented by a state-of-the-art digital backdrop that projects a multitude of settings from the valleys of the Yellow River Delta to the peaks of the Himalayas.

Mr. Hoffman, who adopted two daughters from China—one from Kunming, and the other from Xi’an—appreciates China’s long history.

He said, “There’s so much tradition and history [in China]. This is great to see it expressed in art … just beautiful.”

He said that he saw a performance in mainland China, but it didn’t compare to Shen Yun.

“The costumes are much better here,” he said, as well as the backdrops and music, adding that the dancers are highly synchronized.

When asked if he would recommend Shen Yun to his family and friends, he said, “Yes. Absolutely.”