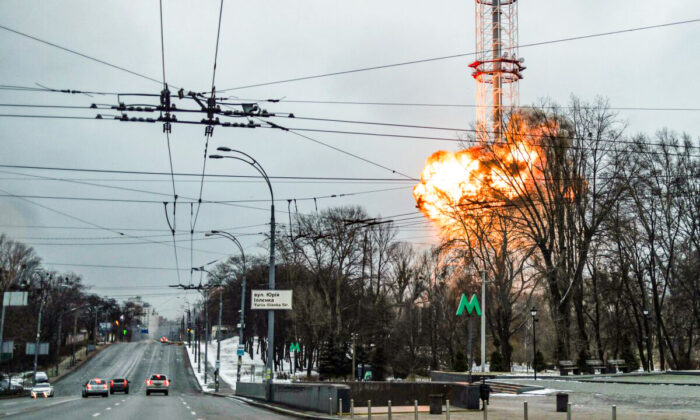 A blast is seen in the TV tower, amid Russia's invasion of Ukraine, in Kiev, Ukraine, on March 1, 2022. (Carlos Barria/Reuters)
Russia-Ukraine War

Senior US Official: Russian Military Has Launched 480 Missiles in Ukraine

A U.S. Department of Defense official on Thursday said that Russian forces have launched more than 480 missiles into Ukraine since the invasion started eight days ago.

But despite this, “airspace over Ukraine remains contested, as [of] yesterday,” said the official, who did not provide details about how the Pentagon obtained such information. “We assess that Ukrainian air and missile defense systems remain intact, and they remain effective. They continue to be able to fly their airplanes and to employ air defense assets.”

There have been claims and speculation that Russia’s military may be underperforming, with some pointing to the long column of tanks and armored vehicles that have remained outside Kyiv for several days.

However, the official said that the Pentagon can “still assess that they have available to them, in and outside Ukraine, the vast, vast majority of their total combat power. They still have an awful lot of capability left to them.”

“So just because they’re throwing in now 90 percent” of their forces in Ukraine, the official said, “we shouldn’t take away from that that this is some sort of overreaction or that they are diminished to the point where … they feel like they’ve got to commit reserves.”

“These are not reserves. This is the combat power that they had assembled to execute this plan,” the official continued. At the same time, there is no evidence to suggest that Moscow is tapping into forces outside of the battalion tactical groups that were assembled around Ukraine before the invasion occurred about a week ago, according to the official.

Russian forces on Thursday continued to surround and attack Ukrainian cities, including Mariupol, the main port in the east which has been under heavy bombardment, with no water or power, according to officials. Officials say they cannot evacuate the wounded.

During negotiations at an undisclosed location, Russia said there was “substantial progress” had been made while the Ukrainian side said that evacuation and humanitarian corridors would be opened.

“That is, not everywhere, but only in those places where the humanitarian corridors themselves will be located, it will be possible to cease fire for the duration of the evacuation,” he said, according to the Reuters news agency.