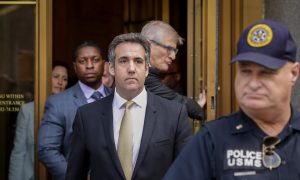 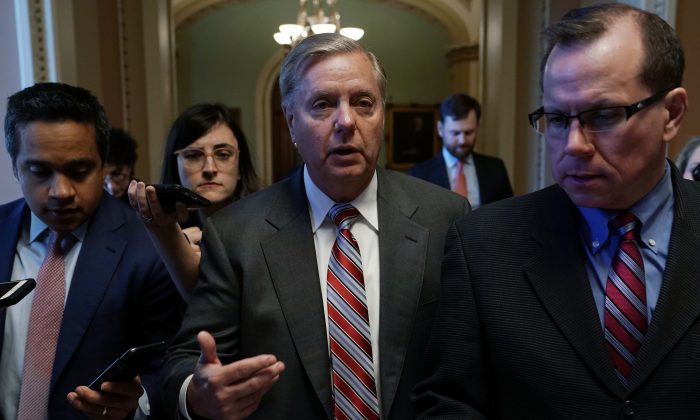 Sen. Lindsey Graham arrives at the office of Senate Majority Leader Sen. Mitch McConnell for a meeting January 10, 2019 at the Capitol in Washington, DC. Senate GOPs are negotiating a solution to resolve the partial government shutdown and border security. (Photo by Alex Wong/Getty Images)
Politics

“A new low for House Democrats: holding hearings with Michael Cohen while President Trump negotiates with North Korea about giving up their nuclear arsenal,” Graham, the chairman of the Senate Judiciary Committee, said in a statement.

Cohen, Trump’s former personal attorney, is scheduled to report to prison in May to serve a three-year sentence for financial crimes, campaign finance violations, and lying to Congress.

He testified before the House Committee on Oversight and Reform on Feb. 27, slandering Trump without offering evidence.

“Democrats’ hatred of Trump is undercutting an important foreign policy effort and is way out of line,” Graham said. “If Republicans had pulled such a stunt, the mainstream media would be outraged!”

The special counsel, who is close to concluding the investigation, has not produced any evidence or indictments related to collusion.

After interviewing more than 200 witnesses and reviewing documentary evidence, the House and Senate intelligence committees have concluded that there is no evidence of collusion between the Trump campaign and Russia.

With Mueller likely to reach a similar conclusion, media outlets that have spun the collusion narrative for more than two years hoped Cohen would finally provide proof that the Trump campaign conspired with Russia to win the election. But neither Cohen’s prepared statement nor the questioning that followed produced any evidence of collusion.

“This might be the first time that someone convicted of lying to Congress has appeared again so quickly in front of Congress,” Jordan said. “There is a reason this is a first—because no other committee would do it.”

The White House didn’t immediately respond to Cohen’s testimony. Trump responded on Twitter in the hours leading up to his summit with Kim.

“He did bad things unrelated to Trump. He is lying in order to reduce his prison time,” Trump wrote.