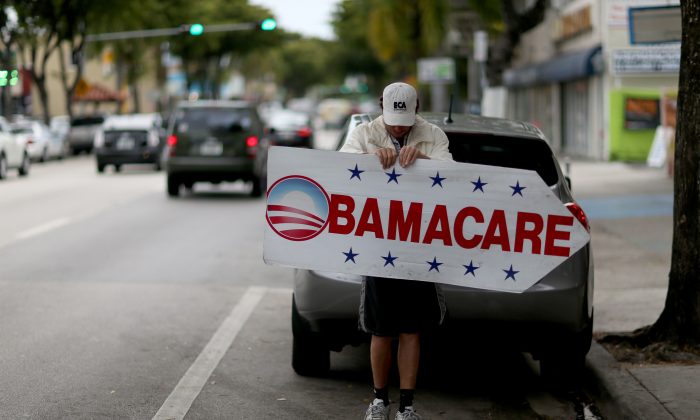 Pedro Rojas holds a sign directing people to an insurance company where they can sign up for the Affordable Care Act, a.k.a. Obamacare, before the Feb. 15 deadline in Miami, Fla., on Feb. 5, 2015. (Joe Raedle/Getty Images)
US

Senate Democrats Have Their Own Idea About ACA Individual Mandate

When the Affordable Care Act became law in 2010, one of the most controversial parts was the individual mandate. A person who does not buy health insurance is charged a penalty at tax time. Proponents of the law held their collective breath as the Supreme Court mulled whether to strike down the individual mandate.

It did not, but in 2015, one year after ACA took full effect, Senate Democrats want to extend the individual mandate enrollment period to give the uninsured another chance to avoid costly penalties.

Perhaps the individual mandate was not as essential as people thought. The penalty was meant to force young healthy people to buy health insurance coverage. The reason to force them was to make sure that insurers had a good pool of people who paid premiums but did not use a lot of medical care. If everyone who bought coverage was old and sick, the reasoning went, insurers would go broke. That would have been the Obamacare death spiral.

In the first open enrollment, about 8 million people signed up, more than had been expected. Young and healthy people did buy insurance. Perhaps the idea of protecting themselves from unexpected medical bills was motivation enough.

The penalty increases every year. It will cap at the cost of the cheapest, “bronze” health insurance plan. The idea was that people would choose to buy insurance rather than pay a penalty. But the people who have not bought it might be punished, without having the opportunity to buy insurance instead of being penalized.

Anyone who failed to buy insurance by Feb. 15 could be hit with an unexpected penalty, and not able to spend that money on health insurance. Three senior House members told The Associated Press that they plan to strongly urge the administration to grant a special sign-up opportunity for uninsured taxpayers who will be facing fines under the law for the first time this year.

The three are Michigan’s Sander Levin, the ranking Democrat on the Ways and Means Committee, and Democratic Reps. Jim McDermott of Washington, and Lloyd Doggett of Texas. All worked to help steer Obama’s law through rancorous congressional debates from 2009–2010.

The lawmakers say they are concerned that many of their constituents will find out about the penalties after it’s already too late for them to sign up for coverage, since open enrollment ended Sunday. According to Kaiser Family Foundation, surveys indicated that most uninsured people were unaware of the 2015 Open Enrollment.

That means they could wind up uninsured for another year, only to owe substantially higher fines in 2016. The fines are collected through the income tax system.

“For the many families who may now be about to pay a penalty, there should be an opportunity to avoid both further penalties and to obtain affordable health insurance,” said Doggett.

For the many families who may now be about to pay a penalty, there should be an opportunity to avoid both further penalties and to obtain affordable health insurance.
— Doggett

The IRS has warned that health-care related issues will make its job harder this filing season and taxpayers should be prepared for long call-center hold times, particularly since the GOP-led Congress has been loath to approve more money for the agency.

“Open enrollment period ended before many Americans filed their taxes,” the three lawmakers said in a statement. “Without a special enrollment period, many people (who will be paying fines) will not have another opportunity to get health coverage this year.

“A special enrollment period will not only help many Americans avoid making an even larger payment next year, but, more importantly, it will help them gain quality health insurance for 2015,” the lawmakers added.

So far, administration officials have deflected questions about whether an extension will be granted. Health and Human Services Secretary Sylvia M. Burwell has authority to grant special enrollment periods under certain circumstances.

Supporters of the law say an extension would mainly help low- to middle-income uninsured people, the same group that Obama’s coverage expansion was intended to serve. But Republicans may criticize it as another tweak to what they see as unworkable “Obamacare.”