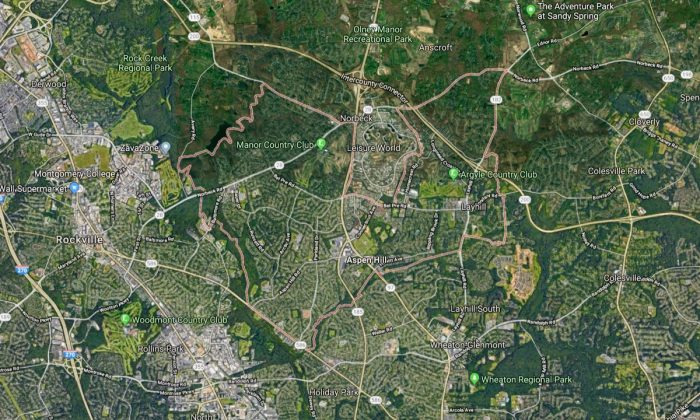 Aspen Hill, Maryland, where a mother tried to saw off her 11-year-old son's head. (Screenshot via Google Maps)
Crime and Incidents

A Maryland mother attempted to saw her 11-year-old son’s head off with a bow saw.

The son told police that he came home from school on March 12 and saw his little brother crying, while his mother was going through alternate fits of laughing and crying. He headed upstairs to play games, according to the police report, obtained and posted by ABC 7 reporter Kevin Lewis.

Kristina Petrie, 46, later approached her son with a bow saw. She asked him why he wasn’t doing his homework. He told her he would begin at 4:45 p.m. She then raised the saw. He tried to escape but ended up kneeling with the saw against his neck. Petrie sawed back and forth. He was able to get away and get the saw out of her hands, according to the statement given to police.

A neighbor came over and the boy’s father came home from work. The father took Petrie to the hospital. A medical worker told police Petrie said she “tried to kill her kids again.” She told them she wanted her kids to die so they wouldn’t be a burden on society, according to the report.

MORE: Petrie's defense attorney told me her client had "absolutely no intent" to harm anyone.

She explained Petrie has been happily married for 15 years, has no prior criminal history, loves her children dearly – and also noted – critical facts will come to light in due time.

The 11-year-old sustained injuries to his back, shoulder, and hand, even three days after the incident. The police report also said that Petrie called her husband and told him that she attacked their child with a saw.

Petrie’s attorney told ABC 7 that her client had not intended to harm anyone. Defense attorney Sharon Diamant said Petrie has been happily married for 15 years and loves her children.

A neighbor told ABC 7 that Petrie is a “lovely, stay-at-home mom” who she would often see taking her kids to and from events or working in her yard.

If she is found guilty on all charges she could face life in prison, with forty years added on top.