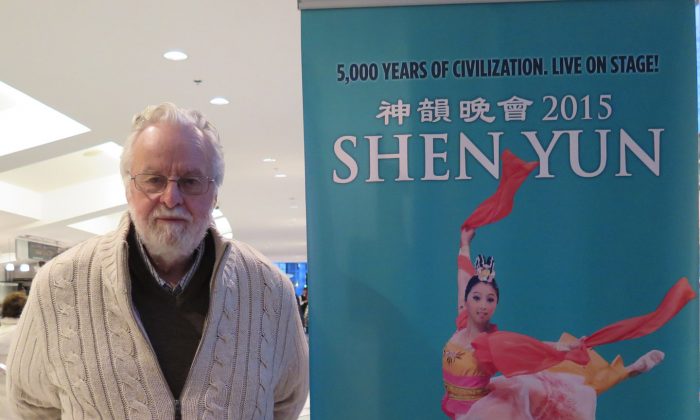 Seeing Shen Yun ‘Is the Event of the Year for Us,’ Says Lawyer

VANCOUVER—Each year when Shen Yun Performing Arts comes to Vancouver, Clive Ansley makes the trip from Courtenay on Vancouver Island to see the performance at the Queen Elizabeth Theatre.

“This is probably the fifth time that I’ve come. It’s the event of the year for us,” said Mr. Ansley after the show on Jan. 10.

“We always look forward to it every year, and I think the thing that impresses me most is that it’s never the same show twice—there’s new routines all the time.”

Mr. Ansley, owner of the law firm Ansley and Company in Courtney, is a fluent Chinese speaker and a former professor of Chinese history, civilization, and law. He lived in China for 14 years, where he practiced law and also taught in several universities.

He is recognized in Canada and internationally as an expert on Chinese law, and is on the board of director of Lawyers’ Rights Watch Canada. Currently he dedicates most of his working time to his lifelong interest in human rights.

Shen Yun came into being in 2006 after a group of leading overseas Chinese artists came together in New York with one wish: to revive the true, divinely inspired culture of China and bring it to audiences around the world.

Systematic destructive communist campaigns such as the 10-year Cultural Revolution all but destroyed the 5,000-year-old traditional culture, which was centred on the idea of harmony between heaven and earth and had at its heart principles from Buddhist, Taoist, and other disciplines.

Shen Yun “is keeping Chinese culture alive, because … it has been abandoned altogether in mainland China,” Mr. Ansley said. “It’s been usurped and used for vulgar political purposes, and so [the cultural revival] is a big part of what we enjoy with it here.”

The Shen Yun performance includes two pieces about the abuses against adherents of Falun Dafa (also called Falun gong) in China, a spiritual discipline rooted in ancient Chinese culture based on the principles of truthfulness, compassion, and tolerance.

The Chinese Communist Party launched a campaign of persecution against the practice in 1999 which continues today. At that time, at time there were about 70-100 million people practicing Falun Dafa in China.

Mr. Ansley, who is the North American chair of the Coalition to Investigate the Persecution of Falun Gong, said people would learn more about the issue having seen the show.