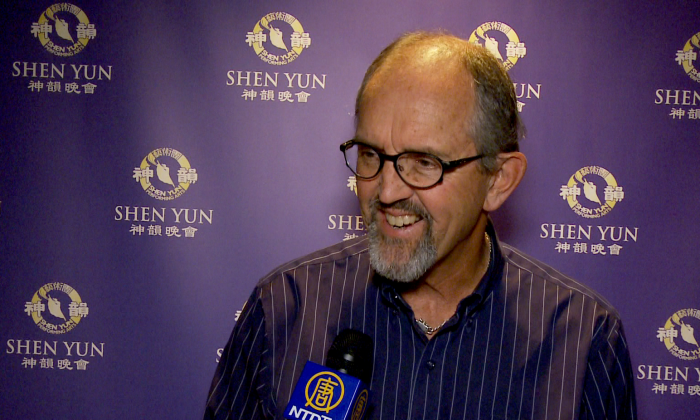 Jim Oliver, Ward 4 councillor for the Norfolk County in Southwestern Ontario, at the Shen Yun performance at Hamilton Place Theatre on May 11, 2016. (NTD Television)
Canada

HAMILTON, Canada—Jim Oliver, Ward 4 councillor for the Norfolk County in Southwestern Ontario, had been wanting to see Shen Yun Performing Arts with his wife for many years.

On May 11, the very last day of Shen Yun’s performance in Eastern Canada, Mr. Oliver and his wife were granted their wish, and they saw the classical Chinese dance and music company perform on the stage at the Hamilton Place Theatre.

“Love the music in particular, and the dancing is spectacular. The costumes—everything is very, very good.”

Shen Yun was formed in 2006 by leading classical Chinese artists in New York, where the company enjoys artistic freedom. The company has been touring the globe each year since its formation, with a mission to revive China’s divinely inspired culture.

Mr. Oliver found it interesting to see China’s history depicted on the stage and said each dance performance tells a part of China’s long history.

“It’s a beautiful culture, so it needs to be revived and told to the world,” he said.

And Shen Yun fulfills its mission with superb artistry.

“They’re doing it … in a very, very creative and entertaining way,” he said.

Being able to see Shen Yun is a “great opportunity,” he added. “We’re very glad to be here.”