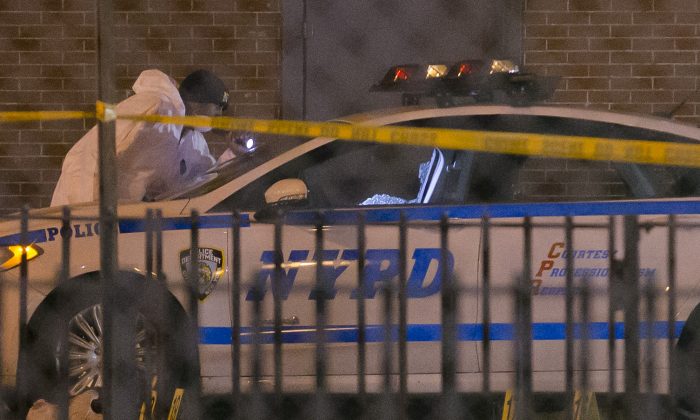 Investigators work at the scene where two NYPD officers were shot, Saturday, Dec. 20, 2014 in the Bedford-Stuyvesant neighborhood of the Brooklyn borough of New York. Police said an armed man walked up to two officers sitting inside the patrol car and opened fire before running into a nearby subway station and committing suicide. Both police officers were killed. (AP Photo/John Minchillo)
US

Following the slaying of two NYPD officers last weekend and the recent arrest of a Queens man who made threats against white police officers, a group of retired officers had a message to New York City Mayor Bill de Blasio.

The group commissioned a plane to fly over the Hudson River with the message: “De Blasio, our backs have turned to you.”

Flying over the Hudson River, by a group of retired cops concerned about NYPD killings pic.twitter.com/7eRNyojDMx ABC pic

Per WABC in New York City, the officers released a statement about their displeasure with the mayor.

The officers chose to remain anonymous but said this:

As a large and unified group of current and retired NYC Police Officers, Detectives, & Supervisors, we are outraged by the mayor’s incendiary rhetoric, and for facilitating the current hostile climate towards the NYPD. We understand that the department and even our own unions can only go so far in their public condemnation of the mayor as to not irreparably damage the working relationship with the city, or future contract negotiations.

It is our opinion that Mayor de Blasio’s dangerous and irresponsible comments about his and his wife’s concern for their son’s safety at the hands of the NYPD fueled the flames that led to civil unrest, and potentially to the deaths of PO Wenjian Liu and PO Rafael Ramos, as well as the continued threats against NYPD personnel. The Mayor shows us no respect, and encourages the public to follow his lead.